Tongyeong music fest aims to be classical yet innovate

The annual festival commemorates Yun, the city’s native son known for his attempts to bridge the music of the West and East. At this year’s festival, world-class musicians will introduce musical works by the composer and others.

This year’s TIMF will be held from March 29 to April 7 under the theme of “Destiny” at the Tongyeong Music Hall. Twenty-five official performances and more events are to take place. “Destiny” was chosen as the theme as 2020 marks 250 years since the birth of Beethoven, whose Symphony No. 5 has also been known as “Symphony of Destiny.”

“We have a reputation of being different and our audience appreciates that,” said Florian Riem, CEO of Tongyeong International Music Festival Foundation, at a press conference held Tuesday at the Goethe-Institut in central Seoul. 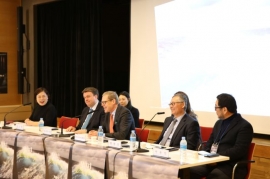 A press conference for the Tongyeong International Music Festival 2019 is held at the Goethe-Institut in central Seoul, Tuesday. (TIMFF)

“Five years ago, it was not easy to have great artists come to Tongyeong. We did not have the budget to try everything. After five years, it has changed a lot. Agents are calling us, artists are asking us to come to Tongyeong. The festival has become a name in the music world,” he said.

TIMF’s opening concert is to feature the Lucerne Symphony Orchestra’s performance of Beethoven’s Symphony No. 5, emphasizing the festival’s theme.

Toshio Hosokawa’s opera “The Maiden From the Sea” will be performed from March 29 to 31 for the first time in Asia. The Japanese composer who studied under Yun will combine Japan’s traditional music with Western opera in the piece that deals with the refugee issue.

The Lucerne Symphony Orchestra will also perform Yun’s final work, “Angel in Flames, Memento with Epilogue” on March 30. The piece was inspired by students’ participation in the democratization movement here in the 1980s and illustrates the late composer’s personal interest in social participation. 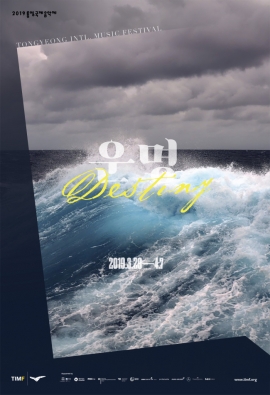 For example, on March 31, star harpist Xavier de Maistre performs with Lucero Tena on the castanets. Spanish flair will be added to the performance, organizers said. The performance on the night of April 1 is titled “Bach and Rumba,” with the program introducing works of Bach and Rumba-themed pieces.

As part of the festival’s social contribution efforts, on April 5 cellist Mischa Maisky will travel to Yokjido, a small island near Tongyeong, to perform for a group of 35 schoolchildren. He will be performing at an official concert the following day.

The festival will close on April 7 with the Tongyeong Festival Orchestra performing Beethoven’s Leonora Overture No. 3 in C Major and Act 1 from Wagner’s “The Valkyrie.”

At the press conference, the CEO of the foundation repeated a quote from the late composer, “When there is injustice in the world, I want to have a say with music,” adding that Yun’s quote lies as the main idea behind the festival.

Asked what makes TIMF great compared to other music festivals, Riem highlighted the location. Tongyeong is a coastal city in the south known for its beauty.

“Well, we have the great advantage of being in one of the most beautiful spots in the country,” he said. “(The festival takes place) at a great place to enjoy the concert in a great setting with great food.”