SK Innovation’s decision to build a US production facility for electric vehicle batteries in Commerce, Georgia, will help raise public awareness and understanding of the next-generation vehicle technology according to the city’s mayor.

Mayor Clark Hill visited Seoul for a weeklong trip that will involve a tour of SK Innovation’s EV battery plant in Seosan, South Chungcheong Province, and some learning about Korea’s cultural aspects.

“SK’s participation in the community will bring about a better awareness of EVs and understanding of what that means, and not just accessibility but having people understand what EV or hybrid EVs could do for them,” Hill said in an interview with The Korea Herald on Monday 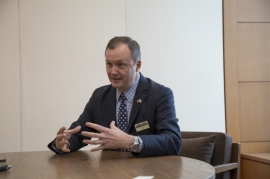 The city has a couple of charging stations for EVs in shopping areas, but the mayor wants to see a greater EV presence.

“There may be an opportunity for us to add charging stations, for instance, at some city government facilities including the Library of City Hall, so that both employees of the city government and residents can charge their vehicles,” the mayor continued.

“The city is interested in sustainability and decreasing the community’s burdens on the environment. So there’s no question, EVs will play an important role in that as we move forward.”

It will be the first manufacturing facility run by a Korean firm in Commerce, which sits in Jackson County, a little over 100 kilometers northeast of Atlanta.

The mayor said his city had geographical advantages and high-quality human resources that could work at the factory designed to produce 9.8 gigawatt-hours of EV batteries by around 2022.

Hill is on his second term as mayor of Commerce since 2012. He was reelected to the post in 2016 with business acumen that has also helped the city attract SK Innovation’s $1 billion factory, which is the largest-ever investment by a foreign business in the city’s history.

“The location of Commerce is unique, as with Interstate 85, one of the major interstate highways that connect the entire eastern coast of the US,” Hill said. “The city is also located at the intersection of Interstate 85 and US Highway 441, which goes all the way into Florida and north. So that kind of puts SK in a location with easy access to deliver products to many of the automotive manufacturers we have in the southeastern US such as Volvo, Mercedes Benz, Toyota, Volkswagen and Ford.”

Together with the State of Georgia and Jackson County, the city is considering providing sufficient incentives and benefits for SK Innovation in terms of taxation and employment.

“We have a program called tax abatement where we give financial incentives to the company by reducing their tax burdens on their physical property and equipment over about a 20 year period,” the mayor said. “We give them those incentives to invest in our community in exchange for reduced taxation.”

The City of Commerce will also be the supplier of most of the major utilities, from natural gas, water, sewage, and fiber optic internet, “for reduced fees almost to nothing,” the mayor said, adding that SK would have no problem finding outstanding talents in Commerce, since there are top-rate colleges and universities such as Georgina Institute of Technology close to the city.

“We have a program called ‘Quick Start’ in partnership with the State of Georgia, where we will work with SK to develop a curriculum for recruiting and training its labor force,” he said.