The United States and North Korea are seriously considering an exchange of liaison officers, CNN reported Monday, as the leaders of the two nations prepare for a second summit next week in Vietnam.

The first step forward in establishing new US-North Korea ties could be the exchange of officers, the US broadcaster said, citing two high-level diplomatic sources.

Establishing new bilateral relations was one of the commitments made by US President Donald Trump and North Korean leader Kim Jong-un at their first summit in Singapore in June.

The two are scheduled to hold their second summit on Feb. 27 and 28 in Hanoi. 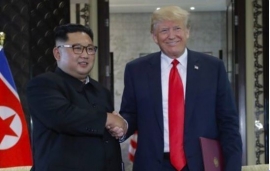 If things go well, the US could send several liaison officers to set up an office in North Korea, led by a senior foreign affairs officer who can speak Korean, CNN reported.

But a diplomatic source told Yonhap that a liaison office alone may be insufficient to draw more concessions from the North.

"North Korea doesn't regard an end-of-war declaration or the installation of a liaison office as a corresponding measure of equal worth as the dismantlement of its Yongbyon nuclear facility," the source said.

An end-of-war declaration is also reportedly in the cards as North Korea seeks to formally end the 1950-53 Korean War, which closed in an armistice, not a peace treaty.

Lee Hae-chan, head of South Korea's ruling Democratic Party, also told reporters in Washington last week that the North appears more interested in economic concessions, such as relief from international sanctions, the reopening of an inter-Korean industrial complex and the resumption of tours to its scenic Mount Kumgang.

"A liaison office would go hand in hand with an end-of-war declaration, but my guess is that they come later on the list of (North Korea's) priorities," he said.

Washington and Pyongyang plan to hold pre-summit talks this week in a third Asian country.

CNN said that after the 1994 Agreed Framework, the two nations held extensive talks over exchanging liaison offices staffed initially with up to seven officers in each.

But a year later, the North canceled the plan after tensions flared up over the shooting down of a US helicopter that crossed the Demilitarized Zone into North Korea. (Yonhap)