The 17-year-old scored 97.33 points at Honda Center in Anaheim, California, on Thursday (local time) and trails Vincent Zhou of the United States by 2.85 points.

The competition is open to skaters from Asia, America, Oceania and Europe. 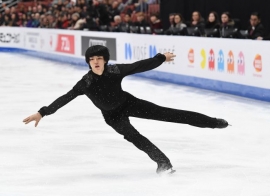 Cha is in the midst of his best season. He has already become the first South Korean man to win a medal at the ISU Grand Prix Final, having finished third with a personal high of 263.49 points in December.

Cha is leading Jin Boyang of China, currently in third place, by more than five points and is poised to become the first South Korean man to reach the podium at the Four Continents.

The 2009 champion Kim Yu-na remains the only South Korean medalist at this annual event.

Cha opened his program with a clean quadruple salchow, his only quad in the routine. He followed that up with a successful triple lutz-triple toe loop combination and later nailed his last jump element, a triple axel.

Cha capped it off with a strong step sequence and change foot combination spin, earning the maximum Level 4 for both.

The men's free skate is scheduled for Sunday in Anaheim, or Monday morning in Seoul. (Yonhap)