[Herald Interview] ‘Chocolate is all about love after all’

Stepping inside chocolate shop Piaf, the aroma of chocolate fills the nose. The smell is captivating, exciting even those who are not sweet-toothed.

The floor plan of the chocolate paradise is relatively simple, without chairs or tables. The furnished atmosphere resembles that of a fine jewelry boutique.

A lone refrigerated showcase stands at the center, open without a glass cover on top. Inside, the stainless steel case is jeweled with a variety of chocolate confections. A chocolatier picks up the pieces customers choose with a pair of silver tongs and places them on a silver tray. 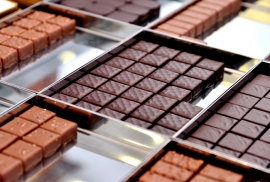 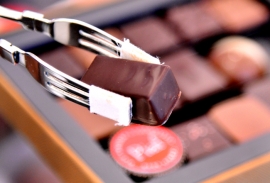 “Keeping the chocolates in a case without a cover is not easy, but this allows the customers to fully experience the color and the scent of chocolates,” said owner-chef chocolatier Ko Eun-soo of Piaf Artisan Chocolatier, also known simply as Piaf, in Sinsa-dong, Seoul.

As you might have guessed, the chocolate shop is named after French singer Edith Piaf. Her songs, including classics “Non, Je Ne Regrette Rien” and “La Vie En Rose,” are the only ones on the playlist.

“Have you seen the film ‘La Vie en Rose?’ Piaf’s life had been all about love. Chocolate is all about love after all, too,” Ko said, explaining why he named the shop Piaf. “Customers usually visit the shop to buy chocolates as presents, especially for their lovers. It is for special occasions, to make the moments extra special.”

“These chocolates are not meant to be eaten all at once. You have to take your time, fully feeling the texture, scent and flavor with each bite,” Ko said. 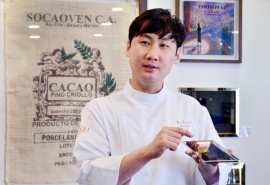 For Ko and his staff, this is the busiest time of the year as they prepare for the big day, Feb. 14 -- Valentine’s Day. According to Ko, a large percentage of their sales are generated on the day. Each year, they come up with fresh yet romantic ways to curate their chocolate.

In 2015, Annie Atkins, a graphic designer who worked on the film “The Grand Budapest Hotel,” created the package for Piaf’s limited-edition chocolates for Valentine’s Day.

This year, Piaf has collaborated with trendy culinary establishments, creating new flavors that mix chocolate with coffee, cocktail, cake, ice-cream and other treats.

Piaf’s daily selection is diverse, ranging from citron to rooibos and salted caramel.

Another signature item is salted praline. Ko enthusiastically compliments the chocolate, saying the bestseller made Piaf what it is today. As with the salted caramel, Ko uses fleur de sel imported from France to create a satisfying salty sweetness.

Figs and port is another specialty, created with a dark chocolate coverture to create a fruity, rich flavor.

It may surprise many to learn that Ko, who studied computer entineering, launched a tech startup in the 2000s. Though he had taken an extreme career turn, Ko reckons the academic experience is helpful for his current work.

“Chocolate-making is a complex, intricate work that requires precision and quick judgement skills. My days of studying science and mathematics is really helping me out these days,” he said.

Piaf’s chocolate are sold exclusively at the Sinsa-dong store. Though there were offers from department stores, Ko is sure that this is the only place he belongs, as of now.

“Branching out could be nice, but this is what I can handle for now. If I scale things up, I may not be able to take care of what I should, losing the customers’ trust,” the chocolate maker said. 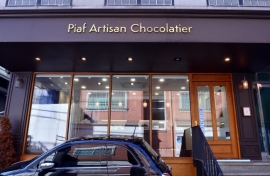 Though the local dessert market has been growing steadily, Ko says there still is a long way to go. For instance, imported chocolate brands from Belgium, Switzerland and the US are big players in the chocolate scene here.

According to the artisan, mass-produced chocolates have their limits, containing certain amounts of preservatives. The chocolates have to last on shelves and last even longer when taken home by customers.

“I am not saying that those chocolates are bad. But people should recognize that artisanal chocolates are on another level from the factory-produced ones,” Ko said. “Chocolate is a very sensitive delicacy that requires precise handling, calculation and a great amount effort.”