South Korea lost to Latvia 6-2 in the opening match of a men's ice hockey tournament at home on Wednesday, after blowing a pair of first-period leads.

South Korea is hosting the Legacy Cup at Gangneung Hockey Centre in Gangneung, 230 kilometers east of Seoul, through Friday. The tournament, which also features Kazakhstan and Japan, celebrates the first anniversary of the 2018 PyeongChang Winter Olympics. Gangneung Hockey Centre was one of two hockey venues during the Olympics and hosted the men's and women's gold medal games. 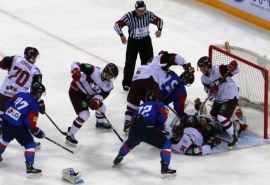 Players for South Korea (in blue) and Latvia battle for the loose puck in front of the Latvian net during the opening match of the Legacy Cup men`s hockey tournament at Gangneung Hockey Centre in Gangneung, 230 kilometers east of Seoul, on Feb. 6, 2019. (Yonhap)

Things looked more promising early on for the 16th-ranked South Korea, as forward Shin Sang-hoon opened the scoring at 5:57 in the first period.

South Korea reclaimed the lead at the 18:42 mark, as Kim Ki-sung redirected a Jung Jong-hyun point shot into the net. Then Latvia made it a 2-2 game just 32 seconds later, when Kristaps Jakobsons beat goalie Matt Dalton through the five-hole.

South Korea missed a couple of opportunities to go ahead and paid dearly when Latvia put up two goals in the second and two more in the third.

Paek has brought a youthful roster to the tournament. Of seven Canadian- or American-born veterans who donned the Korean jersey at PyeongChang 2018, only Dalton and two defensemen, Eric Regan and Alex Plante, are on the team this week.

South Korea is also gearing up for the 2019 International Ice Hockey Federation (IIHF) World Championship Division I Group A tournament starting in April in Kazakhstan.