The unified Korean men's handball team has earned a historic first victory at the ongoing world championship in Denmark. 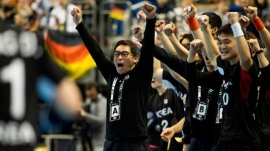 The squad of 16 South Koreans and four North Koreans, coached by South Korean Cho Young-shin, was relegated to the ranking round after finishing last in Group A with five straight losses.

But against Japan, which finished last in Group B, Korea staged a second-half rally for its inaugural win.

This is the first international appearance by a joint Korean handball team, men's or women's.

Korea ended the first half down 14-12. Jo Tae-hun and Park Kwang-soon scored consecutive goals to knot the score at 14-14, and the teams began trading goals until about two minutes remaining.

Jo's 7-meter shot put Korea up 26-25, and Jo converted another penalty throw for a two-goal lead that stood as the final margin.

Kang Jeon-gu led Korea with seven goals and was named the Player of the Match. Remi Anri Doi topped all Japanese scorers with 10.

"This is my first championship on this level, and today was my first win. It was, of course, a nice experience," Kang was quoted as saying by the IHF's website. "Before the game we were a bit nervous, because Japan was getting better and better. But we fought and gave everything we could."

Korea will close out the tournament with the 21st place match against Saudi Arabia on Sunday, also in Copenhagen. (Yonhap)