Jang and Cha were blanked by Wong Chun Ting and Doo Hoi Kem of Hong Kong 3-0 (11-6, 11-8, 11-4) to settle for second place at the International Table Tennis Federation World Tour Grand Finals at Namdong Gymnasium in Incheon, 40 kilometers west of the capital. 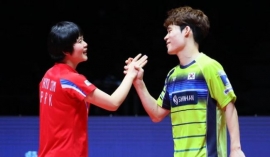 This was the third tournament together for Jang and Cha. The South-North combo won the Korea Open mixed doubles title in July and reached the semifinals in the Austria Open last month.

At the Grand Finals, they knocked off the 2017 world mixed doubles champions, Maharu Yoshimura and Kasumi Ishikawa of Japan, in the quarterfinals on Thursday. Then in Friday's semifinals, they got past Lim Jong-hoon and Yang Ha-eun of South Korea.

But up against Wong and Doo, Jang and Cha couldn't quite conjure up the magic.

The Hong Kong team took the opening game 11-6, thanks to sharp serves and smashes past the Koreans.

In the second set, Jang and Cha held their ground at 4-4, before giving up four consecutive points and losing 11-8.

Wong and Doo charged out to a 4-0 lead in the third game and cruised to the gold medal.

Individually, Wong is the eighth-ranked male player and Doo is No. 13 in the women's rankings. Jang is No. 15 and Cha is 89th in the world.

Jang said he was disappointed not to have won the title on home soil.

"I am not happy with the way I played," he said. "Hyo-sim did her part, but I think I have to get much better. I didn't have an answer to (the Hong Kong team's) serve receive, and I didn't play the way I am capable of."

Jang said he hopes it won't be the last time he plays with Cha, adding he's already eyeing a possible Olympic medal in Tokyo in 2020.

"If we get the opportunity to compete as one Korea at the Olympics, I'll try to make most of that chance and win a medal there," Jang said.

The Koreas have agreed to send unified teams in some sports at Tokyo 2020, though they have yet to decide on the number. The two nations have a long history of cooperation in table tennis, making the sport a strong candidate. But the Koreas will need a buy-in from the ITTF and other participating nations and ensure no athletes from either side will have to sacrifice their Olympic opportunities to make a unified delegation possible.

This competition is open to the top 16 players in the men's and women's singles and the top eight teams in the men's, women's and mixed doubles, based on their performances in the 12 ITTF World Tour events.

Jang will take another crack at a title on Sunday, when he'll play in the men's doubles final with Lim Jong-hoon. They will face Wong and Ho Kwan Kit of Hong Kong.

In the men's singles, Jang was eliminated in the quarterfinals. (Yonhap)