1,000 more classes to open at state-run kindergartens next year: ministry

The Education Ministry announced Thursday that 1,080 new national and public kindergarten classes will open up next year as part of an initiative to lessen dependence on private kindergartens.

In a press briefing, Education Minister Yoo Eun-hye announced the expansion plan and proposed measures to improve the quality of service at state-operated kindergartens. 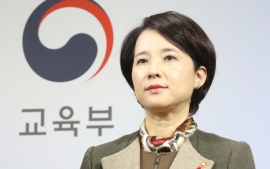 “The Education Ministry and regional education offices agreed to open 1,080 classes next year. In March 2019, 692 classes will be opened across the country and the other 388 will open in September in the same year,” Yoo said.

Of the new classes, 240 will be in Gyeonggi Province, 150 in Seoul, 68 in South Gyeongsang Province, 55 in Incheon and 51 in Busan, the minister said. The numbers were decided in consideration of the need to support regions where attendance at state-run kindergartens is low.

Under the new plan, about 20,000 more preschoolers can be expected to attend state-operated kindergartens, the ministry said.

Thursday’s announcement comes as part of the ministry’s efforts to increase the proportion of children using state-run preschools to 40 percent by 2021.

The ministry’s initial goals were to achieve that attendance figure by 2022 and to create about 500 new classes annually. But the ministry revised its plan in response to pressure from parents, after recent revelations implicating private kindergartens in thousands of incidents of accounting fraud.

The ministry also plans to expand its shuttle bus service for state-run kindergartens, to provide more options for parents.

The ministry also proposed to improve the facilities and services of state-operated institutes. Starting in March, public kindergartens will provide after-hours child care until 5 p.m. for low-income and one-parent households, as well as for families in which both parents work outside the home.

Day care services will also be provided during vacations, under the ministry’s proposal.