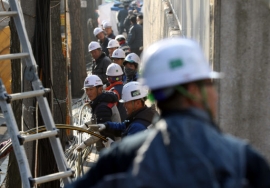 [1] Phone and internet services, cash machines and in-store payment systems provided by KT were paralyzed in parts of Seoul over the weekend after a fire took out key network equipment.

[2] According to fire authorities, the fire broke out in the basement of a KT building in Ahyeon district at around 11:10 a.m. on Saturday. It took about 10 hours for the blaze to be completely put out.

[3] While no human casualties have been reported, KT’s landline, mobile and internet networks in the area went down after the fire hit communications equipment that was installed in the basement of the building.

[4] The network blackout affected mostly western Seoul including Mapo-gu, Seodaemun-gu, Yongsan-gu and Eunpyeong-gu and parts of Goyang in Gyeonggi Province. Services remained unavailable or spotty as of Sunday afternoon.

[5] Seoul city sent emergency mobile phone alerts about the damaged network system on Saturday, but KT subscribers in the area were unable to receive the messages as phone services were down.

[1]Questions from this year’s English test for the Suneung, South Korea’s national college entrance exam, have baffled the internet community, including many Native English speakers.

[2]Final-year high school students all across South Korea took the exam Thursday, but many still cannot get over the difficulty of the English exam.

[3]“It is almost as if they think that the most convoluted writing is the highest standard of the language,” one Twitter user said in reacting to a multiple-choice question from this year’s test.

[4]One paragraph from this year’s tests began: “Heritage is concerned with the ways in which very selective material artefacts, mythologies, memories and traditions become resources for the present.”

[5]According to an analysis by major Suneung preparation academy Jinhaksa, this year’s English test was more difficult than last year’s.

[6]“Unlike last year’s, the passages weren’t easy to comprehend and the answers were harder to find, which means mid-level students might have been pressed for time,” the analysis read.