‘Roles of government, businesses critical for well-being of citizens’

Governments and companies both play important roles in improving the well-being of citizens, said renowned academics on Wednesday, the second day of the sixth OECD World Forum that kicked off under the theme of the future of well-being.

Jeffrey D. Sachs, a professor of economics at Columbia University, said that to improve the well-being of people, trust between the government and society should be rebuilt.

“As the world is facing many challenges, such as environmental harms, risks of wars and nuclear disasters, we need our government to function,” said Sachs during his keynote address.

“Many of our governments are not trustworthy. Every day comes with new scandals, more evidence of massive corruption and evidence of murder by governments. This is a worldwide phenomenon,” he added.

“We need effective and trustworthy governments. So I believe we need to restore public ethics and build the institutions that can not only limit governments but hold them to account.”

He also stressed that governments should be able to handle multinational companies that engage in corruption, environmental destruction, fraud and tax evasion.

“We live in an age where companies are often more powerful than governments. They are out of control,” he said.

“Amazon started a bidding war among American cities which would give the firm billions of dollars, land, infrastructure and tax relief. This is power that is out of control and our government is not powerful enough to hold these powerful, irresponsible agencies to account,” he said. 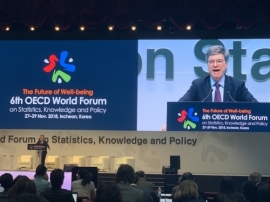 During a panel discussion, Nobel Prize winner Joseph E. Stiglitz, an economics professor at Columbia University, stressed the roles of shareholders and companies in promoting the well-being of employees.

“Job satisfaction forms an integral part of subjective well-being, as many employees spend one-third of their time at work. However, when a company only focuses on maximizing short-term value -- let’s say quarterly performance for shareholders -- this will not lead to maximizing social value, long-term investment and productivity within companies,” Stiglitz said.

He said companies should have a balanced view considering all stakeholders such as employees, shareholders, consumers and the regional community, which would be affected if a company’s plant is shuttered.

During parallel sessions, under the title of “Common Indicators and Measurement Gaps in Measuring the Impacts of Business on Well-being and Sustainability,” panelists discussed the specific impact of businesses on people’s well-being and sustainability.

“We found out from our survey that improving nonmaterial factors at work gives more job satisfaction to employees than wage rises,” Liu said. 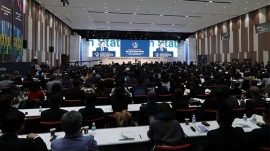 “This result can be an important indicator to small and midsized firms, which may not able to afford high wages to their employees (compared with large companies),” he said.

Dorota Weziak-Bialowolska, a research associate at the Harvard T.H. Chan School of Public Health, highlighted a correlation between psychological factors at work and job satisfaction during her presentation.

She cited a survey of 9,500 workers from nine apparel factories in Mexico, Sri Lanka, China and Cambodia, which was done to understand the relationship between workers’ well-being and business performance.

“We found out that psychological factors, especially whether an employee can depend on coworkers for help and whether there is verbal abuse at work, are highly related to workers’ job satisfaction, turnover and stress at work,” she said.

Jan Emanuel De Neve, a professor of economics at the University of Oxford, said digitalization would lower job security and interpersonal relations while at the same time giving employees more independence and improving work-life balance. This still poses challenges, the professor said, as the strongest driver of job satisfaction is interpersonal relationships at work, which have been found to be even more important than pay or the chance to do interesting work.