[Video] Sohee says angles are most important in ‘Hurry Up’ dance

Every year around Christmas time, the lobby of the Herald Corp. building in Yongsan-gu, Seoul, lights up with a brightly decorated towering tree.

On Thursday, the brilliance was amplified with the presence of rising K-pop star Sohee, who debuted solo from her group Elris with single “Hurry Up,” in October.

Sohee had just wrapped up official promotional activities for “Hurry Up” and had dropped by for an exclusive interview with The Korea Herald.

She demonstrated the “voguing” dance moves for her new song.

“The voguing dance is a flow of ‘model poses’ one after another,” Sohee said with a smile. “I think the most important part (of the dance) is the angled postures.”

The dance was what helped Sohee gain an edge on the audition show “K-pop Star” in 2017.

After appearing on the program, Sohee debuted with five-piece girl group Elris in June 2017, with the album “WE, first.” Hunus Entertainment manages the group.

Sohee has broadened her horizons in the entertainment field since her first standalone single “Hurry Up,” released on Oct. 18. Ballad duo Bolbbalgan4, also known as BOL4, wrote and composed the song in support of Sohee.

The Korea Herald interview article featuring Sohee is on its way. 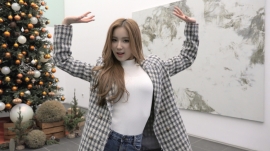