The Korea Institute for Curriculum and Evaluation released the answers for this year’s Suneung, or college scholastic ability test, on Monday, after reviewing complaints filed against this year’s exam questions.

The institute, which organizes the multi-subject standardized exam, released the answers to this year’s Suneung, held on Nov. 15, on its website. It said it reviewed all 991 complaints submitted by test-takers and confirmed no errors were made in the 107 questions that faced objections. 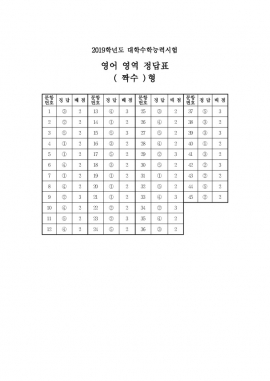 The institute received objections for five days, from the day of the exam to 6 p.m. on Nov. 19. The number of complaints were more than the 978 cases filed last year.

More than half of the objections concerned social studies subjects such as ethics, with 583 cases, followed by 150 cases related to the Korean language subject, 118 cases in mathematics and 70 cases in English language.

None of the 978 objections over 191 questions raised after last year’s Suneung were accepted for correction. Since the exam was introduced in 1994, there have only been eight questions that were fixed to accept either multiple or all-answer choices.

For this year’s Suneung, 594,924 people applied for the test, 11,397 more than last year, according to the Education Ministry.

The level of difficulty for this year’s Suneung appears to be similar to that of the previous year. The test results, based on the answers announced Monday, will be released on Dec. 5.