The Defense Acquisition Program Administration delivered the Nojeokbong vessel, named after a mountain peak in the southwestern city of Mokpo, to the Navy in the event at Hyundai Heavy Industries' shipyard in Ulsan, some 370 kilometers southeast of Seoul. 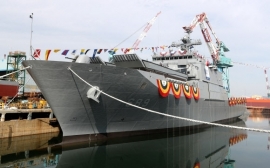 It is the Navy's fourth Cheonwangbong-class landing ship following the Cheonwangbong, Cheonjabong and Ilchulbong vessels. They are named after mountain tops in South Korea.

The newest ship, which has a maximum speed of 23 knots, can carry some 300 troops, three landing boats and eight amphibious armored vehicles in addition to the 120-member crew. It is also equipped with an interior command center for amphibious landing operations.

The Navy plans to train the ship's crew for some four months before putting it into service in the first half of next year. The construction of the vessel began in November 2015. (Yonhap)