Uriminzokkiri, the North's external propaganda website, on Sunday warned South Korea against its move to vote for a new human rights resolution at the United Nations.

"The South should think carefully before behaving rashly about what kind of catastrophic consequences such a move would invite in the future," it said. 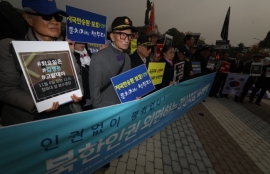 "Our government will participate in the adoption of the resolution under the basic principle to make joint efforts with the international community for the human rights of North Korean people to be addressed substantively as a universal value of mankind," Kim said at a press briefing.

The North's media claimed that the South's decision to support the resolution "evoked resentment from the Korean people," it continued. "How should we interpret their attitude to participate in adopting a criminal document that viciously insults our leader and system, right after the two held historic summits to promise reconciliation and cooperation?"

It threatened that the peace efforts between the two could go to waste at any time if Seoul goes ahead with its support for the resolution.

Since last week, North Korea has intensified its calls for Seoul not to participate in the vote via its various media outlets. (Yonhap)