South Korea said Wednesday it received a prior notification from the United States on its plan to put off high-level talks with North Korea in New York this week.

Washington informed Seoul of the decision before a related announcement by the State Department, according to senior presidential press secretary Yoon Young-chan. 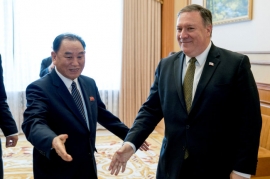 Secretary of State Mike Pompeo was scheduled to meet with Kim Yong-chol, a top aide to the North's leader Kim Jong-un, on Thursday.

The department, however, said their talks would take place "at a later date."

In the surprise statement that came shortly after the US midterm elections, the department's spokesperson Heather Nauert gave no other details, including the reason for the cancellation and a new schedule.

"It's regrettable," the official told reporters.

He asked them not to attach an "excessive meaning" to the delay in the talks, however, saying it's part of a long process to achieve complete denuclearization and a peace regime.

"We expect (the two sides) to reschedule talks at an early date," the official said.

President Donald Trump canceled his summit with the North's leader Kim Jong-un in spring but rescheduled it later. They met in Singapore in June. (Yonhap)