Teacher arrested on charges of leaking exam papers to daughters

A Seoul court on Tuesday issued an arrest warrant for a teacher at a private school on charges that he leaked exam questions to his twin daughters who attend the same school.

Earlier in the day, the Seoul Central District Court held a hearing to decide whether to issue an arrest warrant for the 53-year-old teacher, whose identity was withheld. 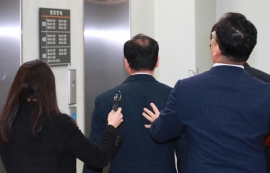 He's accused of stealing exam questions and answers for his daughters, second-year students at Sookmyung Girls' High School in the affluent southern district of Gangnam, since last year. Prosecutors filed for his writ on Friday on the charge of obstruction of business.

Suseo Police Station, which has been investigating the case, found forensic evidence from the teacher and the girls' mobile phones backing up the suspicions. The girls had apparently jotted down the answers to some exam questions in their memo apps days before the test.

Police launched the probe last month after a Seoul education office concluded in its own inquiry that they could have engaged in possible wrongdoing.

The inquiry found that the two students wrote the same wrong answers for some of the questions on the exams and that they shot up to the top ranks in too short a time considering their previous assessment marks.

Suspicions about the girls and their father were raised by several parents with kids attending the school, who questioned the oddly sharp rise in the girls' grades. (Yonhap)