More than 20 Korean NGOs, including human rights groups, protested the Seoul Peace Prize Cultural Foundation’s recent decision to award Indian Prime Minister Narendra Modi this year’s Seoul Peace Prize, saying he does not deserve the honor as he has a history of being complicit in violence against Muslims in India.

“We demand (the Seoul Peace Prize Cultural Foundation) retract its decision to give the Seoul Peace Prize to Mr. Modi,” the 26 groups, including the Center for Refugee Rights in Korea and the Korean House of International Solidarity, said at a press conference in Seoul on Wednesday. 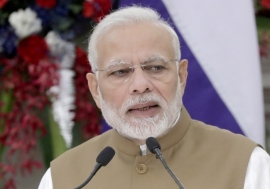 Calling Modi “the perfect candidate,” the prize committee had said the Indian prime minister was being recognized for “Modinomics,” saying the economic reform program had “reduced social and economic disparity between the rich and the poor” in India.

Visiting India in July, President Moon Jae-in held a summit with Modi and adopted a joint declaration that outlined increased economic cooperation between the two countries, including a proposal to raise the trade volume to $50 billion by 2030, from the current $20 billion.

Known as a Hindu nationalist, Modi was chief minister of the Indian state of Gujarat at the time, when 59 Hindu pilgrims returning from a religious site were killed in a fire inside their train that was blamed on a Muslim mob.

The incident triggered a series of deadly riots in Gujarat in which more than 1,000 people were killed, many of them Muslims. At the time, Modi was accused of deliberately ignoring the killings by his extremist Hindu allies.

Modi was banned from entering the United States in 2005, as well as the United Kingdom and the European Union, for his involvement in the deadly riots in 2002.

The United Kingdom and the European Union eventually lifted their bans -- in 2012 and 2013, respectively. He was also eventually invited to Washington after becoming India’s prime minister in 2014. 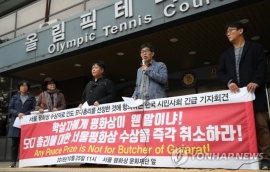 The Korean protesters compared Modi to South Korea’s former President Chun Doo-hwan, who has been accused by some of orchestrating a massacre of civilians during his term in office in the 1980s.

“Giving Mr. Modi this prize for ‘Modinomics’ is almost equivalent to giving Mr. Chun Doo-hwan a peace prize for Korea’s economic development in the 1980s and the hosting of the 1988 Seoul Olympic Games,” the protesters said.

“Mr. Modi’s win is also a disgrace to the past laureates of this prestigious award."

Established in 1990 to commemorate the success of the 1988 Seoul Olympic Games, the Seoul Peace Prize is awarded biennially to people who have made a significant contribution to world peace.