South Korea’s Ministry of Science and ICT will consider launching a joint government investigation into the tax and network usage fee arrangements of foreign information and communication technology companies such as Google and Facebook.

During the ministry’s parliamentary audit held at the Gwacheon Government Complex on Wednesday, Science and ICT Minister Yoo Young-min said that it would work with multiple ministries to determine the exact amount of taxes foreign ICT firms pay in Korea, and the standards under which they are being calculated.

The move comes in line with recurring complaints that global ICT firms are not bound by the same laws -- in areas such as tax payments and network usage arrangements with local telecom companies -- that apply to competing Korean firms in the sector like Naver and Kakao. 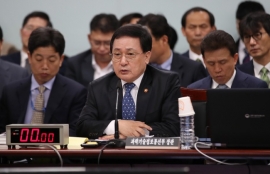 “We’re currently discussing this issue with the Ministry of Economy and Finance, the Financial Services Commission, the Korea Communications Commission and the Fair Trade Commission, and will consider launching a joint investigation for this task,” Yoo said.

Yoo also pledged to work directly with the National Tax Service to ensure that foreign companies report their earnings properly to the local government.

“Companies like Google, Amazon and Facebook are skilled at minimizing the taxes they have to pay around the world. And if they cannot be properly taxed while reaping trillions of won in profits here, then the (Korean) government is not doing its job,” said Rep. Park Sun-sook of the minor opposition Bareunmirae Party.

Park called on the ministries to launch a joint investigation into foreign ICT firms to determine the exact amount of profits being made in Korea in order to measure due corporate taxes.