The cosmetics company cited dwindling sales and accumulated debt as reasons for its mounting losses. 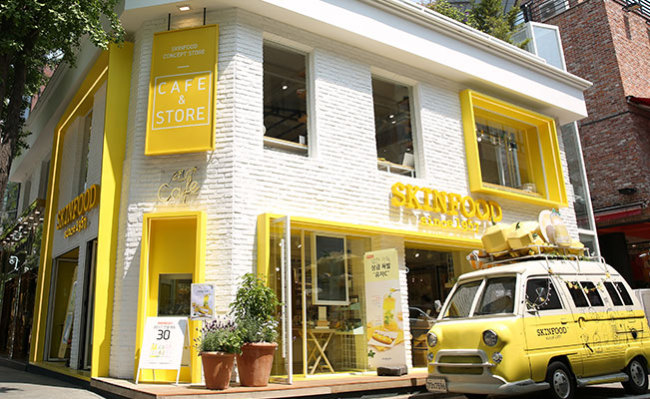 Skinfood store in Seoul (Skinfood)
“Although the company is currently at stake in securing liquidity due to excessive debt, considering Skinfood’s unique branding and product competitiveness we believe the court restructuring and normalization of the business will benefit everyone, including the creditors,” the company said in a statement.

Skinfood entered the market in 2004 and quickly built a cult following with the unique concept of “delicious cosmetics made with delicious food.”

It soon ascended in the market to No. 3 in terms of sales, following Missha and The Face Shop, recording 200 billion won ($176 million) of annual sales in five years after its launch.

The company, however, was hit by a sharp drop in the number of tourists following the Middle East respiratory syndrome outbreak in 2015 and a diplomatic row between Seoul and Beijing over a US missile defense program deployment in 2016.

According to the regulatory filing, the company has been losing money for four consecutive years since 2014, with sales dropping 25 percent on-year to 126.9 billion won as of last year. Its debt reached 43.4 billion won with 781 percent of debt-equity ratio.

Speculations have also mounted that Skinfood is set to close stores due to shortages in stock.

Earlier this month, Daegu District Court accepted a request of injunction against Skinfood’s parent company iPEERES Cosmetics factory in Anseong, Gyeonggi Province. The request was filed by Skinfood’s 14 contracted companies after Skinfood failed to pay up some 2 billion won for delivered goods.

“The market has been overflowing with newer and cheaper cosmetics brands which target young customers in their teens and 20s. With diversified online and offline sales channels, the conglomerate-backed companies have come to perform even better,” said an official from a beauty conglomerate who declined to be named.

Unlike local drug and beauty shops like Olive Young that run sales events nearly every month, Skinfood has stuck to its no-sale-promotions policy.

What’s worse was that the company’s overseas sales had dwindled four years after entering markets in 19 countries including the US, China and Japan.

As part of the company’s last resort to overcome the financial crisis, it partnered with Amazon Korea’s global sales division earlier this month and launched an official brand store on the Amazon US e-commerce platform.

It also plans to work with US health and beauty drugstore brands like CVS Pharmacy and beauty select shop Riley Rose.

“In the long-term, the company will proactively respond to the changing online markets and strengthen the digital commerce division. We will also put efforts to restructure the profit models by realigning the stock and cutting ingredient costs,” said a Skinfood official.