Cambodian worker dies after being hit by excavator

A foreign worker from Cambodia died at a railway construction site in Gangseo-gu, Busan, on Thursday after being hit by an excavator, police said Friday.

According to Busan Gangseo Police Station, an excavator operator on site found the victim’s body on the ground, crushed beneath chain tires, around 3:40 p.m. Thursday. The 32-year-old victim sustained fatal injuries to the neck, chest and stomach. 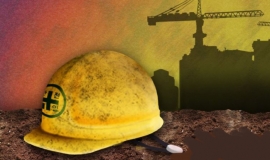 The man reportedly entered South Korea on a work visa three months ago and had been working at the railway site since July.

Police are investigating the exact cause of the fatal accident, but they believe the man was working on the railroad floor composition when an excavator grinding the side-wall concrete nearby hit him.

Authorities said they have reached out to the Cambodian Embassy in order to repatriate the body to his family back home.