A 4.5-ton cargo truck collided into two vehicles on the side of the Gyeongbu Express Highway en route to Seoul from Daejeon, killing one person.

The fatal crash occurred around 12:05 a.m. Thursday near the Biryong Junction in Daejeon. Police said the 4.5-ton truck rammed into the victim’s 1-ton cargo truck and another 25-ton trailer truck. 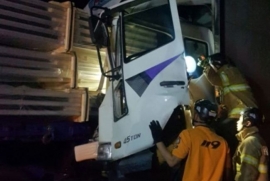 The 25-ton truck driver told police that the victim had stopped him to complain of damages due to “an object that fell from the 25-ton truck.” They were checking the side of the trailer when the other cargo truck caused the accident, according to reports.

Authorities said they suspect the driver may have fallen asleep at the wheel at the time of accident.