The government held an emergency meeting of Cabinet ministers Sunday to discuss measures to stem the spread of the deadly Middle East Respiratory Syndrome following the country's first MERS case in three years.

Health authorities said Saturday that a 61-year-old man was confirmed to be infected with the lethal virus after returning from a business trip to Kuwait via Dubai of the United Arab Emirates. It marked the first case of the disease here since 2015. 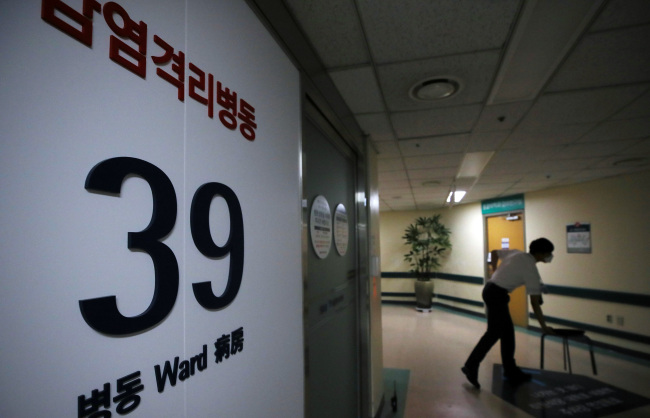 (Yonhap)
"What's most important is the initial response," Prime Minister Lee Nak-yon said at the start of the meeting that also included the health minister, the interior minister, and the chief of the Korea Centers for Disease Control and Prevention, as well as hospital officials and private experts.

Lee said all possible measures should be done in a pre-emptive manner to prevent the virus from spreading. He also instructed officials to provide as much information to the public as possible, noting that people have traumatic memories of the disease that killed 38 people in 2015.

Further details of the meeting were not immediately available.

According to health officials, the MERS patient visited a local hospital during his stay in Kuwait for diarrhea but showed the same symptom again on his way back home. He was rushed to the emergency room of Samsung Medical Center in southern Seoul upon his arrival at Incheon International Airport.

After examining him in an isolated section of the emergency room, the hospital reported him as a suspected case of MERS for showing symptoms of fever, phlegm and pneumonia. He was then moved to Seoul National University Hospital in central Seoul and tested positive for the disease.

The man and about 20 people, who came in close contact with him, such as flight attendants, passengers, medical staff, and quarantine and immigration officials, have been quarantined at home, but the number could rise, officials said.

MERS is a viral respiratory disease with a fatality rate of 20-46 percent. It is caused by a novel coronavirus carried by camels and can be spread when someone is in close contact with a patient for a sustained period.

It was first reported in Saudi Arabia in 2012 and has since spread to other countries. Most people infected with MERS develop severe acute respiratory illness, including fever, cough and shortness of breath, the CDC says. Many of them have died. (Yonhap)