Samsung Electronics will start taking preorders for the upcoming flagship Galaxy Note 9 smartphones one day earlier than before in order to boost its sluggish smartphone sales, according to the industry on Thursday.

The South Korean phone manufacturer was set to unveil its second flagship smartphone for the year in New York at midnight on Thursday, and begin the preorder process Monday in the Korean market.

Korean mobile carriers had been planning to embark on receiving reservations for the new Samsung phones on Tuesday, but the date was changed in discussion with Samsung recently, according to news reports. 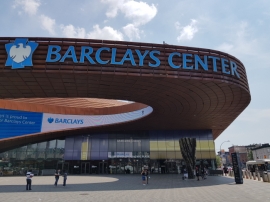 Samsung’s Galaxy Note 9 debut is to take place at Barclays Center in New York at midnight on Thursday. (Yonhap)

“Samsung is seeking last-minute measures to boost sales of the new phones after recording lower-than-expected sales of the Galaxy S9 and S9+ phones in the first half of the year,” said an industry official.

According to industry estimates tallied by major parts suppliers, shipments of the flagship models had reached less than 19.2 million units for the period between March and June.

It remains to be seen whether the new Note 9 model would help Samsung break the sluggish sales trend amid falling demand for premium phones, market watchers say.

The Note 9 will have an upgraded S Pen with Bluetooth technology that will enable gaming and camera functions, according to the phone’s teaser accidentally released before the official debut.

The 6.4-inch phone’s battery will be the largest-ever at 4,000 milliampere-hour, and it is supported by Samsung’s new artificial intelligence assistant Bixby 2.0.