The government confirmed Friday that the martial law document drawn up by the Defense Security Command during the Park Geun-hye administration included a plan to deploy tanks in Seoul, censor the media and block the National Assembly from ending the emergency action.

Presidential spokesperson Kim Eui-kyeom said during a press briefing that there were key differences from the usual plans for martial law, such as the people who would be in command, indicating the document in question was designed for implementation.

The controversial martial law document “Wartime Martial Law and Joint Action Plan” was first released by an opposition lawmaker and a human rights activist group earlier this month. The Defense Ministry submitted the appendix to the document to Cheong Wa Dae on Thursday, Kim said.

“We realized the (newly submitted) document was totally different from other regular martial law documents drafted by Joint Chiefs of Staff every two years,” Kim said. “We expect a thorough investigation to discover whether the document was designed for implementation.” 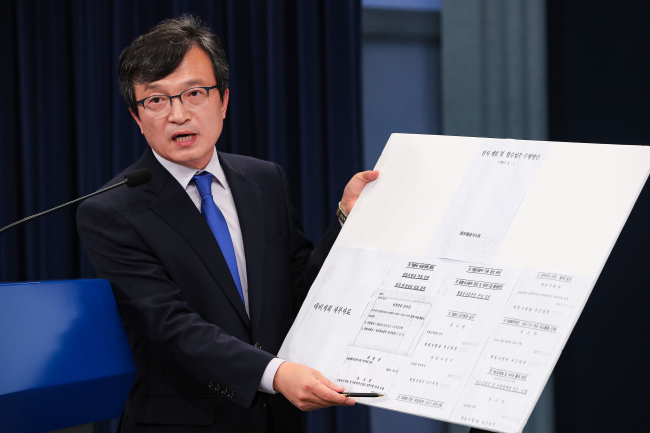 Presidential spokesperson Kim Eui-kyeom. Yonhap
Titled “Detailed Information for Contingency Plan,” the appendix included a plan to deploy mechanized and Special Forces units in the nighttime to Yeouido and Gwanghwamun, where the National Assembly and government complex are located, respectively, Kim said.

According to Kim, the 67-page document contained a detailed procedure to “rapidly deploy” division-level units and Special Forces to 494 main facilities, including Yeouido and Gwanghwamun, where massive protests were expected.

The plans were to be implemented if the Constitutional Court ruled against the National Assembly’s decision to impeach former President Park, who is now in jail over abuse of power and corruption, said Kim.

Asked during a meeting with lawmakers held earlier in the day whether the document amounted to a plan for a military coup, Defense Minister Song Young-moo declined to comment, saying that the special investigation panel would bring everything to light.

“The very existence of such a document is serious problem,” Song said during the meeting with members of the parliamentary judiciary committee. “But I can’t comment on (the document) right now. Everything will be found out by the special investigation panel.”

The revelation came as controversy mounts over the allegation that the Defense Security Command drafted a document to impose martial law in March last year, when the country was waiting for the Constitutional Court’s ruling on former President Park’s impeachment.

The debate has continued to roil South Korea, with the defense minister at the time of the protests claiming that the document in question was simply a contingency plan in the event that protesters forced their way into Cheong Wa Dae.

The presidential spokesperson denied this claim, saying that the newly submitted appendix shows that the martial law document was more of an action plan, as it is different from plans for martial law drafted by the Joint Chiefs of Staff.

“The Joint Chiefs of Staff plan contains a manual for martial law -- such as when martial law can be declared and what procedure will be required. But the Detailed Information for Contingency Plan is totally different,” Kim said.

Among the differences is the command structure under the martial law. The appendix stipulates that the chief of the Army, not the chairman of the Joint Chiefs of Staff, would be appointed as martial law commander and assisted by the deputy chief of the National Intelligence Service.

The appendix also confirmed that the Defense Security Command had drafted detailed procedures for declaring martial law, such as a scheme to censor news outlets and impose control over public opinion on the internet, the presidential spokesperson said.

The scheme also included a plan to prevent the National Assembly from lifting the martial law by ordering the then-ruling Liberal Party of Korea to boycott the legislature, Kim added.

The marital law document also called on the military to secure key points to successfully implement martial law. The document also included a plan to convince foreign media and embassies about the need for declaring martial law, Kim said

“Given the seriousness of the document, we have decided to disclose the document to the public as promptly as possible. We expect the Defense Ministry to conduct a neutral and thorough investigation,” Kim said.