When Ryu Hee-seon, 25, attended her first queer parade in 2011, she could not help but burst into tears. A young lesbian who had very limited exposure to the queer community at the time, she had never seen so many sexual minorities all at once before.

“Not many universities (in Korea) have queer groups on campus, and my school had none. I had nowhere to turn to,” she told The Korea Herald.

“I’m an introvert and always have been, and at the time I felt very uneasy opening up to others (on campus). So most of my interactions with other LGBT people had strictly been online, as I felt it was safer that way. Seeing so many of us at the parade made me realize other possibilities for the first time -- that may be I don’t have to be alone all the time. And that’s when I cried.” 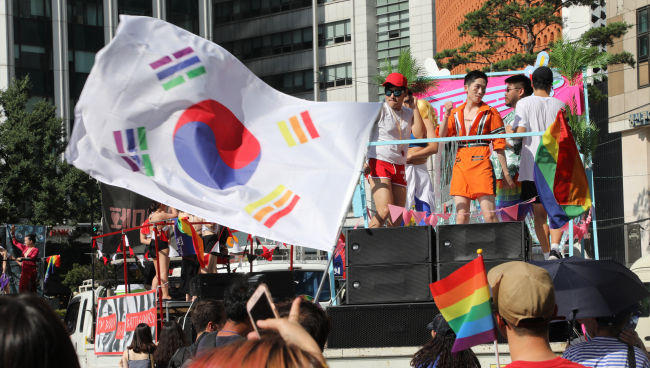 Participants march through central Seoul at the Pride Parade in central Seoul on Saturday, waving a rainbow-colored South Korean national flag, among others. (Yonhap)
Some seven years have passed, and Ryu, now an artist, attended her eighth parade in Seoul on Saturday -- this time with her girlfriend, Kang In-hye. She had been attending the parade every year since 2011, but this year’s edition was her first time participating with a romantic partner. Ryu says she has come a long way. For one, she and Kang no longer get hurt by the conservative and Christian opponents who have been fiercely opposing the parade by holding anti-gay rallies.

“I think they’ve been unintentionally helping us,” said Kang, grinning. “Before they started anti-gay rallies at our annual parade, I think not many paid attention to it aside from us LGBTQ individuals. It had very much been an event of our own. But thanks to the anti-LGBT rallies, we are getting much more media exposure now, and at the same time, much more support. People join us regardless of their sexual orientation. And we love that.”

Ryu and Kang are some 120,000 LGBTQ people and their allies who attended the parade and related events Saturday, in spite of more than 220,000 Koreans signing an online petition against it, as well as large-scale and loud protests by elderly conservatives and Evangelical Christians. This year’s parade -- the 19th since the first edition held in 2000 -- was held in Seoul City Square; it came on the heels of a rise of anti-feminism sentiment here, as well as public display of Islamophobia against foreign-born asylum seekers. 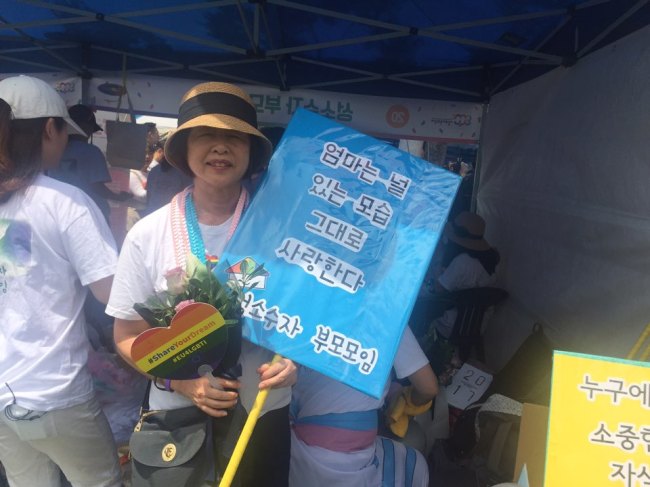 A parent, whose daughter is a transwoman, holds a sign that says "Mom loves you the way you are" at the annual Seoul Queer Culture Festival in central Seoul, Saturday. (Claire Lee/ The Korea Herald)
Such a social climate was apparent throughout the event. There was a strong presence of anti-gay conservatives, who have also recently opposed labor rights and refugee migration to Korea, among other issues. They repeatedly chanted, “Homosexuality is a sin,” and “we are going to protect our country from homosexuality.” One woman sobbed, while repeatedly saying “Lord, have mercy on them, lord, have mercy on them.”

Goh Eun-ji, an activist from Nancen, a center for refugee rights in South Korea, was at the parade to inform that there are foreign-born asylum seekers who have filed for refugee status in Korea solely because of their sexual orientations.

“What’s been happening lately in our country, especially the public display of hatred against Yemini asylum seekers, have been disheartening to watch,” she told The Korea Herald.

“There are asylum seekers in this country who had to escape their home countries because as sexual minorities, they didn’t feel safe to live there. We thought it is important to raise awareness, especially in such social climate, in an event like this today.”

For many LGBTQ Koreans and their allies, Saturday’s event was their first time joining the parade. Among them was a group of Catholic LGBTs, who had never officially participated in the annual event before.

“We (Catholic LGBTs) have been having our own gatherings for the past 18 years,” said one of the organizers of the group, who only wanted to be identified by his last name Park.

“Ours has been a social gathering, not a political one. But last year, one of our members who attended the parade, told us that sexual minorities from all sorts of religious organizations were participating in the event, including those who were Buddhists and Protestants, and that it was disheartening to see the absence of us Catholics. So this year we decided to come forward and participate, just to show that we exist, and to work in solidarity with other LGBTQ communities.”

Park, 42, said he’s been a Catholic for more than 30 years. He said the Korean Catholic Church does not know the existence of their group, and that many of his LGBT colleagues have given up their Catholic faith in the past.

Just last month, Pope Francis said only heterosexual families can form a family, while condemning abortion. “(In Korea), the Church is not really ‘opposing’ our existence,” Park said. “We basically don’t exist. No one talks about homosexuality at our church. It’s as if the word ‘homosexuality’ doesn’t exist, either.”

Unlike his friends, however, Park said he never considered leaving the church altogether. He said his Catholic faith is an integral part of who he is, as much as his sexual orientation is. “I believe God created us, and I believe he created me,” he said. “And God made me this way. This is the way he created me. And I believe there must be a purpose, a reason why he made me into (a gay man). I’ve always found my peace in believing that.” 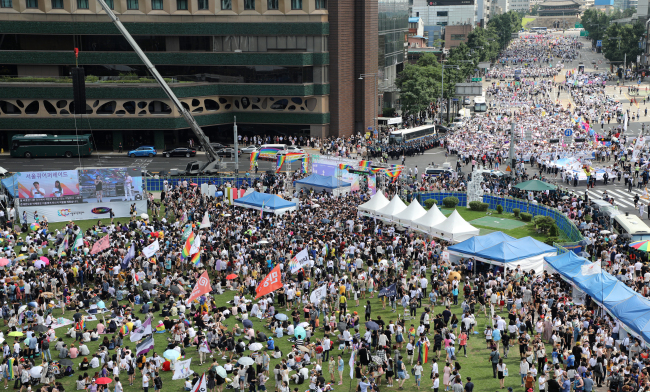 An anti-gay rally is being held outside the Seoul City Square where the annual Seoul Queer Culture Festival is taking place. (Yonhap) 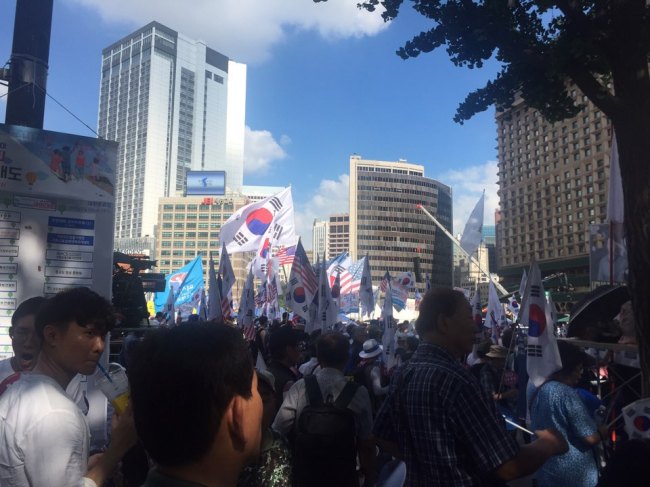 Nah Myung-won, 26, was a participant who identified zirself as an asexual -- meaning ze doesn’t feel sexually attracted to anyone, regardless of their gender. Nah said ze only realized zir sexual orientation after reading a news article published by a foreign news outlet, written in a foreign language.

“There was a phase where everything was confusing,” Nah said. “All I wanted to do was to have coffee or watch movies with my romantic partners, while they obviously wanted other things. Things became clear when I finally got access to information on asexuality and there were other people like me.”

Nah said asexual individuals often encounter ill-informed comments from both straight and queer individuals, many of which ze found to be violent. “I’ve heard things like, ‘you just have not met the right person,’ or ‘you should explore more to know for sure – maybe you are a lesbian,’” ze said. “So I thought it was important to be here, to challenge what is often defined as ‘normal,’ both in queer and straight communities.” 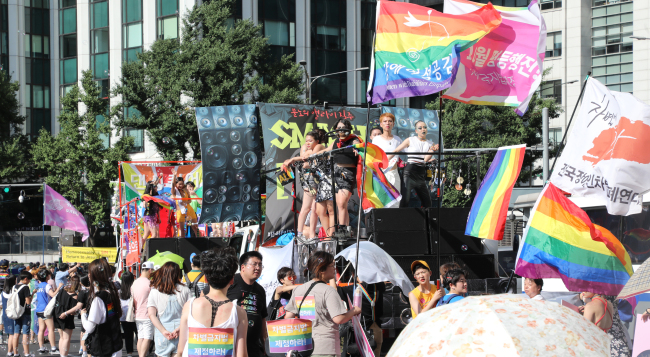 (Yonhap)
For a Korean-born, queer American adoptee Chaelee, attending a queer parade in Seoul for the first time meant, among many things, to seek visibility.

“In Korea, I can sit on the subway and people won’t assume that I’m an adoptee or a queer person…. In the U.S., I also feel that I have to come out as an adoptee, because being adopted and being queer are both things that are not really talked about in mainstream Asian American communities,” she said.

“In the U.S., there isn’t a lot of representation of queer people of color, queer Asian Americans, or queer Korean Americans in the media, so it’s important for me to see such a large community of queer Koreans together and not in hiding (by attending the queer parade in Seoul).”

Homosexuality is not illegal in South Korea, but there is currently no legislation outlawing discrimination. Same-sex unions remain illegal, while a number of sexual minorities have been subject to hate crimes in the past.

Aside from the elderly conservatives, there were also young Koreans, mostly university students, who attended the counter-protest on Saturday.

“I believe the only way to protect the so-called ‘gay rights’ is to educate them and help them leave homosexuality,” said Rah Seung-hyun, a Christian student at Kyung Hee University, who was at the anti-gay protest while the parade took place in central Seoul.

“Enacting anti-discrimination laws and legalizing same-sex marriage will only put their physical and emotional health and well-being at risk.” 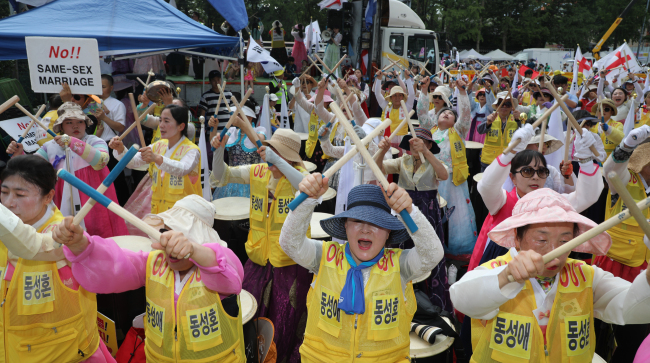 Anti-gay protestors participate in a rally while the annual Seoul Queer Festival takes place in central Seoul, Saturday. (Yonhap)
‘I’m doing this because I love her’

Ryu Hee-seon said attending the annual festival has made her a happier, confident person. She says it has turned her into a “member of a vibrant community” from a “victim who used to be alone.”

“I had never seen so many people who so publicly expressed their hatred against me, against who I am,” said Ryu, recalling her first time encountering anti-gay protesters at the parade back in 2011.

“I remember being hurt and telling them to stop in tears. I remember telling them, I have done nothing wrong, I have hurt no one, and they should stop saying such hurtful things to me. I’m so used to their presence now, and they don’t bother me as much. I attend the annual parade to have fun, and to remind myself that people like us indeed exist and that we support each other.”

Ryu plans to come out to her mother next year, once she moves in with her girlfriend, In-hye.

She said her mother is a Christian, and has been very vocally against homosexuality – not knowing that her daughter is a lesbian. A few years ago, after attending the annual queer parade, Ryu left some of the souvenirs from the event in her room, which her mother accidentally discovered.

“It looked as if my mother had just discovered the world was going to end in a minute,” Ryu said. “So I told her that straight people also go to queer festivals just to have fun. Of course, that was a lie. And I hated having to lie to her all the time, and that was one of the reasons why I moved out.”

Ryu has written a letter to her mother, in her preparation for her coming-out. She said her mother will probably get very upset, and may not speak to her for a while. Rhu said she has accepted this and is willing to work for it. “I wrote in the letter (to my mother) that unless I reveal the integral part of who I am to her, I cannot share my life with her,” she said.

“That I am only telling her this because, more than anything, I love her.”