Following Asiana Airlines’ latest inflight meal fiasco, a group of shareholders of Asiana Airlines are moving to file a lawsuit against the Kumho Asiana board including Chairman Park Sam-koo, industry sources said Wednesday. 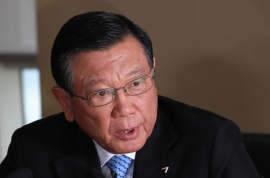 According to the sources, an unconfirmed number of shareholders are reviewing ways to submit class action to hold company board members and Chairman Park responsible for damages from causing inconvenience to passengers and hurting the brand image.

Last week, the air carrier’s catering service for some international routes was suspended in the process of changing the airline’s meal suppliers, prompting questions of unfair contracts.

An Asiana Airline official told The Korea Herald that the company would decide how to deal with the lawsuit if the actual accusation is submitted.

Meanwhile, the company was also accused of having appointed a foreigner to its board of directors, which goes against the Korean aviation law.

The Ministry of Land, Infrastructure and Transport said that a probe into the board of members revealed that a US citizen named Brad Park sat on the Asiana board from March 2004 to March 2010.

Park is allegedly a close friend of Chairman Park. The company said Park did not engage in company management.

Despite finding the violation, the ministry said it decided not to revoke Asiana’s license because the Transport Law, prior to its revision in 2012, did not forcibly disqualify airlines in the case of such a violation.