[ The Korea Herald – Send E-mail ]
[Feature] NK focuses on developing Wonsan tourism zone
Tourism industry seen as ‘least intrusive’ way to earn foreign currency
By Ock Hyun-ju
Published : Jun 20, 2018 - 16:32
Updated : Jun 21, 2018 - 01:40
When US President Donald Trump said that North Korea had the potential for condos and hotels on its “great’ beaches at the press conference following the summit with North Korean leader Kim Jong-un on June 12, Kim may have been eyeing it up for years.

The young leader’s debut on the world stage may signal the beginning of his efforts to develop the economy of his impoverished country.

At the heart of it, for now, appears to be boosting tourism. 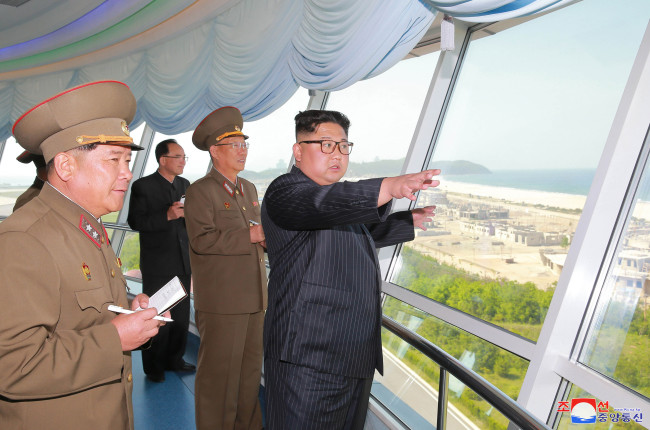 This year, Kim has been seen pushing for a massive tourism project in North Korea’s eastern coastal city of Wonsan, 180 kilometers from Pyongyang, which experts say could be the quickest and easiest way to earn foreign currency amid heavy international sanctions.

Kim visited Wonsan-Kalma coastal tourist zone, ordering the completion of the project by April 15 next year, the anniversary of the birth of North Korea’s founder Kim Il-sung, the state-run Korean Central News Agency reported in May.

A mass civilian-military rally was held in Wonsan to reaffirm their commitment to complete the construction of the tourist district in time, according to a photo published by the state-run daily Rodong Sinmun earlier this month.

Since coming to power in 2011, Kim has been pushing to boost the tourism industry.

In 2014, North Korea announced a plan to construct a tourist zone along the coast connecting Wonsan and Mt. Kumgang. It built a Masikryong Ski Resort in 2013, and opened Kalma airport, reserved for the military, for civilian use. Domestic air service between Wonsan and Pyongyang was launched on June 4, according to its state-run propaganda website.

According to a 2015 leaflet published for potential investors, the impoverished country plans to invest $7.8 billion into the project by 2025 with the aim to attract 1 million foreign tourists. 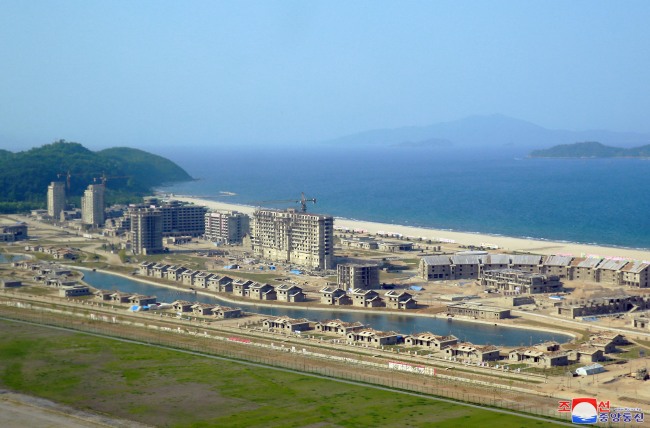 A local daily recently reported that Kim Yong-chol, vice chairman of the Central Committee of the Workers’ Party, requested “investment support” from the US for the Wonsan-Kalma coastal tourist zone as one of the economic rewards in return for the North’s denuclearization.

Tourism is the least intrusive way to earn hard currency, said an economist.

“Through tourism, North Korea can earn foreign currency without having to change its regime,” said Kim Byung-yeon, a professor at Seoul National University and author of the book “Unveiling the North Korean Economy.”

There may be several easons why the young leader, who spent part of his childhood in Switzerland, picked Wonsan in particular.

Yang Moon-soo, a professor at University of North Korean Studies, said Kim Jong-un has a special attachment to Wonsan, which is rumored to be where he was born and spent much time with his mother Ko Yong-hui.

“Wonsan has a competitive edge as a tourist destination due to its magnificent scenery, but it only began to be widely promoted after Kim Jong-un took power,” Yang said. “Also, it is highly unusual that North Korea invests its own money to develop tourism infrastructure.”

The isolated country appears to be accelerating the completion of the project amid rapidly warming ties with South Korea, said a North Korea expert Kim Young-hui.

“Wonsan has a geographical advantage -- its proximity to South Korea. Tourists in Seoul could easily travel to the Wonsan-Kumkang area via rail,” said Kim, head of North Korea Economic Research Team at the state-led Korea Development Bank.

“I think North Korea wants to complete the project quickly to push for inter-Korean projects and draw investment as soon as its relations with South Korea are improved and sanctions are lifted,” she said.

Only hours before his summit with Trump in Singapore, Kim went on a nighttime walkabout to learn about the “social and economic development” of Singapore, whose major contributor to economy is tourism, the state-run Korean Central News Agency reported.

His vow to learn from the knowledge and experience of Singapore may offer a clue as to what Kim has in mind for his country’s economic development -- a shift to a thriving market economy under a single-party rule and tight top-down control.

Kim Jong-un’s recent push to develop the tourist zone could be a sign that North Korea is preparing to develop its economy despite its isolation, or to gradually open up to the outside world, experts say.

Kim is likely to push for sanctions relief first and experiment with its tourism project to see whether the regime could pursue economic opening while retaining power before deciding whether to fully open up its economy, they point out.

Over the past several years, North Korea has been slapped with heavy sanctions that have throttled its trade -- including coal, iron, seafood and textile exports -- and limited its imports of crude oil, for its nuclear and missile programs.

Sanctions relief would open the door for more trade with its neighboring countries, especially with its economic lifeline China, and unlock access to economic assistance from global financial institutions, and attract foreign investment.

“Kim Jong-un understands that he cannot stay in power for long only through a reign of terror,” said the economist Kim Young-hui. “Nuclear weapons can guarantee the regime’s security from the outside world, but not from internal threats. North Korea would have to deliver economic growth and improve the livelihoods of North Koreans for his regime survival.”

In April, Kim Jong-un officially abandoned “Byungjin” policy -- the dual pursuit of nuclear weapons and economic development -- and said the country would now focus on rebuilding a “powerful socialist economy.” The ambitious five-year economic development plan is to expire in 2020.

Under Kim Jong-un’s leadership, North Korea’s gross domestic product is projected to have expanded every year with the exception of 2015, according to the Bank of Korea figures. Its per capita gross national income in 2016 was just 1.5 million won, less than 5 percent of that of South Korea.

“North Koreans are openly saying that reforming and opening its economy is a must,” said Kim, who defected from the North in 2002.

Analysts are divided over how quickly the North will open up its economy, even after the sanctions are lifted, however.

“The tourist project is only a beginning. I expect North Korea to open its economy as much as China and Vietnam did,” Kim said. “For that, North Korea would badly need economic assistance and foreign investment, especially from the US, to deepen economic interdependence, which could prevent the US from using a military option against the North.”

Signs of North Korea embracing elements of the market economy are already visible.

About 450 unofficial markets are in operation where North Koreans trade agricultural products and consumer goods mostly brought illegally from China. There are about 4 million mobile phones in the North, also, analysts estimate.

These markets, or “jangmadang,” emerged as North Korea’s economy took a direct hit from the Soviet Union in 1991. In 2002, the North partially legalized the markets in the so-called July 1 measure that instituted market-oriented reforms.

Hong Min, a senior researcher at the Korea Institute for National Unification, also said that the Wonsan tourist project could be a symbol of Kim Jong-un’s openness to the outside world.

“North Korea will fully open its economy as Kim Jong-un is not driven by ideology, but by interests,” he said.

Others, however, argue that the North Korean leader is likely to liberalize the economy at a slow pace, fearing that broader economic freedom might destabilize the regime and loosen his control over the country.

“At first, Kim Jong-un will likely develop the economy to the level where he can control and maintain power,” said Kim Byung-yeon, the SNU professor. “But if sanctions continue and if North Korea has no way to develop its economy without giving up nuclear weapons, I think is possible that he may choose the economy over nuclear weapons.”

Pushing for the tourism project without internal economic reforms -- such as allowing private property rights -- shows that the country will follow a model of state-led economic development, said Ko Myong-hyun, research fellow at the Asan Institute for Policy Studies. 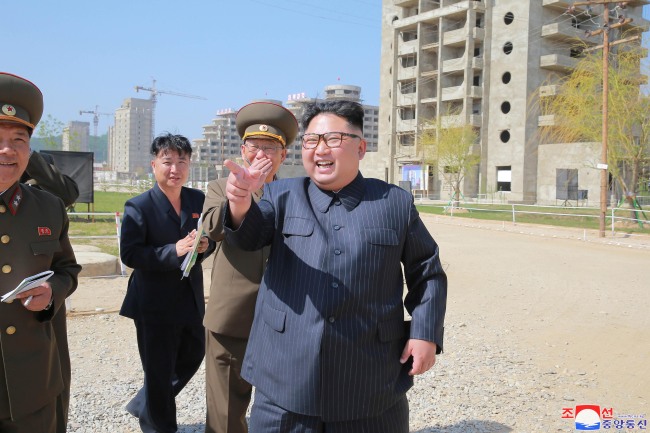 “What North Korea wants most is hard currency for the Kim Jong-un regime, not its people. Kim needs money to buy off elites and sustain military to stay in power for long,” he said.

Unlike his father and grandfather, Kim Jong-un is using the market economy, rather than cracking down on it, to the regime‘s advantage. Still, the reclusive country will neither open the private sector nor leave the economy solely to the market, he said.

“It would want investment or economic assistance at a state level, which can directly benefit the regime and be controlled,” he said, adding any economic opening could initially be limited to “special economic zones” to minimize the political risks.

Since North Korea designated Rason Special Economic Zone in 1991, the number of special economic zones in North Korea has grown to 26. Twenty-one of the 26 were added under Kim Jong-un, although most allegedly have attracted little investment.

The suspended inter-Korean industrial park in the North’s border city of Kaesong is another example of how Kim might be looking to maintain state control over the economy, said another expert.

Thae Yong-ho, who defected to the South with his family in 2016 while serving as deputy ambassador at the North‘s embassy in London, said Kim will not follow in Vietnam‘s or China’s footsteps.

“It will pursue the Kaesong model of economic development, restricting access and information from the outside world and prohibit capitalist elements from expanding into the communist state,” said Thae, referring to the now-shuttered Kaesong Industrial Complex.