From “K-pop Star” to “Superstar K” to “Unpretty Rapstar” to “The Unit,” the audition programs the two members of KHAN have gone through pretty much sums up the competitive and variable nature of the K-pop industry.

Like other K-pop aspirants, Yuna Kim and Jeon Min-joo competed in several audition programs, endured grueling practice and trained under agencies with the hope of debuting. 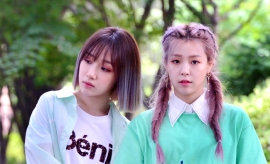 The pair originally debuted with the girl group The Ark in 2015, but the dream-come-true moment didn’t last long, as the ill-fated act disbanded shortly after releasing its one and only single the same year.

It turns out, however, that every cloud has a silver lining. The pair finally debuted as KHAN earlier last month.

“To be honest, it’s harder than what we thought it would be. Since singing live is our strength, we go back to our practice room after performing on music shows and practice more and more, rarely getting any sleep. So our throat conditions are deteriorating right now, but every single day is like a dream, because it’s something that we haven’t been able to do for years,” said Kim during a recent interview with The Korea Herald in Seoul.

KHAN’s debut single “I’m Your Girl?,” released in May, is a medium-tempo R&B electronic pop track, produced by Black Eyed Pilseung, a prominent K-pop producer duo and mastermind behind Twice’s “TT” and “Cheer Up” as well as Chungha’s “Rollercoaster.” 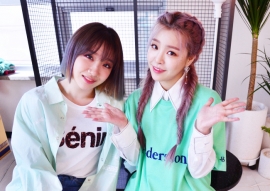 The pair emphasized that their biggest strength is to perform live on every music show. Thanks to its impressive vocal prowess that is not hindered by dance movements during live performances, KHAN has earned the nickname “livedol,” meaning an idol group that is strong with live performances.

Instead of wearing short skirts and high heels, the care-free women prefer singing in wide pants, jerseys and sneakers. Their fingernails were also clear of nail polish, a rarity among K-pop idols who often decorate themselves from head to toe.

“We may look pretty in high heels and dresses, but what we want people to see from us is our talent, not our appearances,” Jeon said.

The two women, both 24-year-olds, have totally different personalities and characters, with Kim being more outgoing and talkative and Jeon preferring to stay home and have a small circle of friends.

But throughout the last six years they’ve spent together since The Ark, they have become close, with just one glance making them burst into giggles.

Behind the laughter, however, were years of struggles and tears.

Jeon, who has been training for 10 years to become a K-pop star since elementary school, confessed that there have been moments when she nearly gave up her dream.

“For those 10 years, I was discouraged so many times. If I was almost reaching my dream, it then went into vain, and such things just happened over and over again. When The Ark went into tailspin, I felt everything was falling apart,” Jeon recalled.

“I’d almost come to the conclusion that maybe I wasn’t meant to do this job. But there was nothing else I could do other than this. So I challenged myself again by competing in ‘K-pop Star 6.’ I was worried that people might have a negative image of me, but I’m so glad that things spanned out well.”

Jeon added that when she was a young trainee, she felt undermined for not having an idol-like face. She was disappointed at how appearances outweighed talent in the K-pop scene.

Kim, who hails from New York, also talked about her early struggles over cultural differences when she first came to Korea.

“Literally, I was totally nerdy, kind of a girl who wore giant glasses and obsessed over studies. I could rarely understand the Korean language and jokes used when I came to Korea,” she said.

They are not perfectionists, but creativity runs in their blood. KHAN has been uploading cover videos of pop songs on YouTube, and the high-quality videos have been receiving positive reactions from global fans. One foreign netizen even called KHAN’s “Despacito” cover the best cover ever done by any Korean artist.

“Since there are many artists who are capable of songwriting and composing, I think making a good song is what really matters. Now we are doing covers, we someday hope to make our own music and even promote overseas,” Kim said.