Hong Joon-pyo, the chief of the main opposition Liberty Korea Party, resigned Thursday after his party suffered a crushing defeat in the previous day's local elections.

The LKP won only two of the 17 big mayoral and gubernatorial races contested in Wednesday's local elections. It also won only one parliamentary seat in by-elections held concurrently with the local elections.

Hong's resignation was widely expected as he wrote a message on his Facebook saying "The buck stops here." 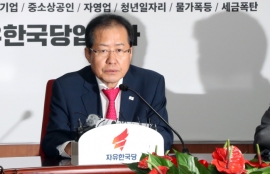 "This is all my fault and all responsibilities fall on me. I respect the people's choice," Hong said at a press conference.

"As of today, I resign from my post. I hope that party officials join hands to make (the LKP) become a party that can regain public trust."

The ruling Democratic Party clinched a landslide victory in the latest elections on the back of strong public support for liberal President Moon Jae-in and his drive for inter-Korean rapprochement.

The conservative LKP has slammed the government's engagement with North Korea with Hong calling North Korea's olive branch to Seoul and Washington a "fake peace show."

The LKP is still reeling from low public trust in it following last year's ousting of former President Park Geun-hye due to a corruption scandal. The party even failed to win key mayoral and gubernatorial races in its traditional strongholds.

Kim Sung-tae, the floor leader of the LKP, will serve as an acting chief for a while. Kim plans to hold an emergency meeting of party officials Friday to discuss its post-election strategy.

Earlier in the day, Yoo Seong-min, a co-leader of the minor opposition Bareunmirae Party, also resigned after the party failed to win even one seat for big-city mayoralties and provincial governorships.

The party won only 20 minor races in the elections, where up for grabs were more than 4,000 local administrative, legislative and educational posts.

"I solemnly accept the people's choices and resign to take responsibility for the election defeat," Yoo said during a news conference. "I offer heartfelt thanks to those who supported our candidates." (Yonhap)