A male staff member of 3M Korea looked excited and happy at the 14th AmCham CEO Servers’ Night at the Conrad Seoul on Tuesday.

After taking a selfie with his company head, he said, “I got up some courage under the influence of alcohol. I am now so happy that I just sent the photo to my parents.” 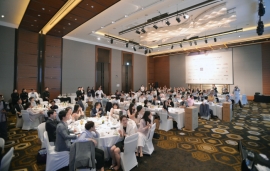 Next to him, 3M Korea President Amit Laroya was busy serving wine and food to around 20 employees, cheering his staff and giving presents to them through small events. There was the sound of laughter and merriment.

Similar scenes were seen in other tables sit by around 230 employees from 16 companies at the venue. After receiving dinner service training by hotel staff, 16 CEOs of AmCham member companies were happily but busily serving food and wine to their coworkers.

The CEO Servers’ Night has been hosted each year by the American Chamber of Commerce in Korea’s charitable arm, Partners for the Future Foundation, since 2003. The event raises scholarship funds for university students from families experiencing financial difficulties.

“I am having fun now,” said Amit Laroya, president of 3M Korea, with a smile.

“All the employees work hard throughout the year. Today, this is an opportunity for me to serve them,” he added.

On the other side of the venue, a female CEO was seen very proficiently serving wine and food.

She was Chae Eun-mi, representative director of FedEx Express Korea, who joined this charity event for the seventh time.

“I participate in the event every year because I can express my gratitude to my employees,” Chae said.

All proceeds from the event, around 50 million won ($46,000), will be donated to the Partners for the Future Foundation to be to provide scholarships to university students in need, according to AmCham.