The South Korean retail industry has bet on increased sales on Election Day, by rolling out vote-empowering marketing as well as promotional events.

Department stores, one of the crowded places on the red-day Election Day, presented various benefits to lure shoppers to come after casting their ballots.

Galleria Department store gave out gift certificates, free ice cream and 10 percent-off coupons for those who voted, as part of the vote day promotion event. Galleria delayed the store opening on Wednesday from 10:30 a.m. to 11 p.m. as well, to encourage employees to vote before coming to work. 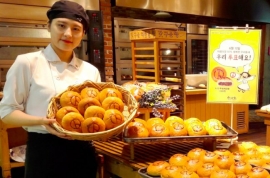 “Since this year’s Election Day is mid-week, it makes it easy for shoppers to come out and shop, instead of travelling outside the city,” said an industry insider.

Microbrewery company The Booth Brewing said it presented a 15 percent-off promotion on drinks for Election Day.

Hanwha Hotel and Resorts’ Aqua Planet aquarium in Jeju, Ilsan and Yeosu also offered discounts for those who voted.

Coex Aquarium in Seoul released tickets at a discount price, based on the voter turnout in every hour.

Although most companies in the retail industry saw buoyed ambience led by promotions and events targeting the voters, some companies remained silent due to issues to be solved after the local election.

Lotte Group, which has been pushing ahead with building a shopping complex in Sangam, northwestern side of Seoul, as well as Shinsegae Group which has been eyeing the construction of its multiplex mall Starfield in Changwon, South Gyeongsang Province, have seen their plans rolled back. Due to confrontations with small merchants in the area, government approval for the plans has been delayed until after the local election.

“Our investment as well as business operation plans came to a halt. While some candidates tried to use this issue politically during the local election, we will have to see how the situation goes after the local election ends,” said an industry insider.