How profitable will inter-Korean business be?

Anticipation for economic ties with the North is growing in the South following the milestone US-North Korea summit on Tuesday and the inter-Korean summit in April.

North Korea opening its market could be a boost to South Korea’s economy in the long term, as it has already entered a slow-growth stage, but it would come at the expense of hefty costs in the short-to-mid term, analysts said.

According to a report released by the Korea Institute for International Economic Policy in 2015, inter-Korean businesses would lead the South’s gross domestic product to see annual average growth of 4.7 percent over the next 40 years. Korea’s GDP growth has been hovering around 3 percent for the past decade. 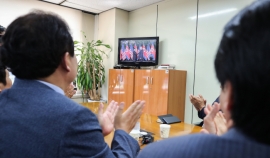 Officials of a corporate meeting on the Kaesong Industrial Complex, under the Korea Federation of SMEs in Seoul, clap as they watch US President Donald Trump and North Korea`s leader Kim Jong-un shake hands at their summit in Singapore, Tuesday. (Yonhap)

The first one is the “H-shaped economic belt,” which develops economic zones of the east and the west of the Korean Peninsula as well as the Demilitarized Zone that spans from east to west.

Another economic belt is the development of the East Sea area of Mount Kumgang, Wonsan, Tanchon, Cheongjin and Rason jointly with the North and connects to Busan, Russia and Japan. The projects include the resumption of Mount Kumgang tourism, the logistics business of the North’s Najin port and Hasan and the development of the Dooman River jointly with the North, China and Russia.

Apart from economic development, interest is also growing in the North’s abundant mineral resources, whose potential value is estimated at around 3,000 trillion won ($2.77 trillion), according to the Korea Resources Corporation.

North Korea has 42 kinds of minerals seen as minable. Among them are a reserve of rare earth minerals, which are necessary for the production of digital devices including smartphones and computers. Others include tungsten and molybdenum, which the South Korean government identified as among “10 key rare metals that need to be secured.”

In 2016, North Korea exported minerals worth 1.5 trillion won mostly to China, according to the Korea Resources Corporation. Japan, France and Switzerland had investment agreements with the North, but they were not able to actively push for the development due to US sanctions on the country.

“(If the two Koreas agree to cooperate) the North’s mineral development will help the South to stably secure minerals and have price competitiveness,” said Chung Da-yee, a researcher at Meritz Securities.

South Korea is currently the world’s fifth-largest mineral consumer, but relies on imports from other nations for 90 percent of its supply.

Despite the rosy outlook, there is no such thing as a free lunch. In order to modernize and develop the North’s economy, the South would need to pay astronomical costs and patiently await the returns, analysts said.

Economic integration with the North is estimated to cost the South around 540 trillion won, according to a report released by the Financial Services Commission in November 2014.

Of that figure, around 151 trillion won would go to infrastructure, including railways, roads, power, communications, airport and ports, the report said.

The Korea Development Bank also released a report last year saying North Korean development would cost the South around 705 trillion won over the 20 years from 2017 to 2036.

Still, the potential spillover from the North’s growth would likely be quite limited in the near to medium term “even in a very positive scenario considering the small size of the North Korea economy at the moment,” said UBS economist Li Zeng.

The North’s gross national income per person was 1.45 million won in 2016, compared to the South’s 32 million won in the same year, according to the Bank of Korea.

Cho Dong-ho, chief of the Institute for National Security Strategy, said, “It is difficult to optimistically view the spillover effect to the Korean economy from the US-North Korea summit and the inter-Korean summit.”

“The North will not be completely changed overnight due to some positive phrases from the summits. Economic sanctions will be lifted when the agreement on denuclearization is carried out,” Cho said, adding it would take at least one or two years.

“The North may not also welcome too much foreign capital, as it is likely to want to retain its socialist economy. We need to wait and see first before giving an upbeat assessment,” he added.