US President Donald Trump on Wednesday expressed his gratitude to North Korean leader Kim Jong-un for taking “the first bold step toward a bright new future for his people.” 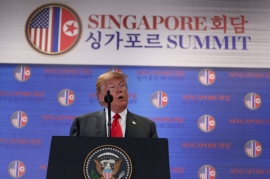 Hailing the unprecedented US-NK summit on Tuesday as proving that “real change is possible,” Trump said that there is no limit to what North Korea can achieve when it gives up nuclear weapons and opens up to the world.

“Chairman Kim has before him the opportunity to be remembered as the leader who ushered in a glorious new era of security & prosperity for his citizens!” he tweeted, using Kim’s official title.

Trump also boasted about the results of the summit held on the Singaporean island of Sentosa with a burst of tweets aboard Air Force One on his way back to Washington.

“The World has taken a big step back from potential Nuclear catastrophe!“ he wrote. 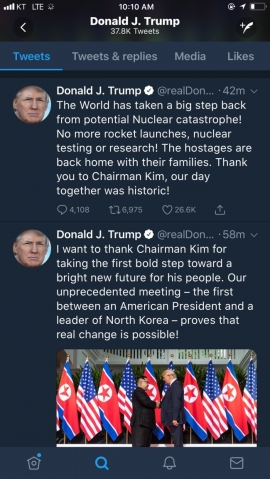 “Great progress was made on the denuclearization of North Korea. Hostages are back home, will be getting the remains of our great heroes back to their families, no missiles shot, no research happening, sites closing,” Trump tweeted, saying he “got along great” with Kim.

After the summit, Trump and Kim issued a joint statement in which the US promised a “security guarantee” for North Korea in return for the reclusive country reaffirming his commitment to the “complete denuclearization” of the Korean Peninsula.

But the commitment fails to specify what the denuclearization process would entail and Trump is facing criticism for making too many concessions to the North.

Trump said at a post-summit press conference that he will suspend US-South Korea joint military drills while talks with North Korea are underway, calling the exercises “expensive” and “provocative.”

Pyongyang has denounced the drills as provocations and a rehearsal for war, while the US and South Korea have maintained that they are defensive in nature.