US counterspy warns World Cup travelers' devices could be hacked

WASHINGTON -- The top US counterintelligence official is advising Americans traveling to Russia for football’s World Cup beginning this week that they should not take electronic devices because they are likely to be hacked by criminals or the Russian government.

In a statement to Reuters on Tuesday, William Evanina, an FBI agent and the director of the US National Counterintelligence and Security Center, warned World Cup travelers that even if they think they are insignificant, hackers could still target them.

“If you’re planning on taking a mobile phone, laptop, PDA, or other electronic device with you - make no mistake - any data on those devices (especially your personally identifiable information) may be accessed by the Russian government or cyber criminals,” he said. 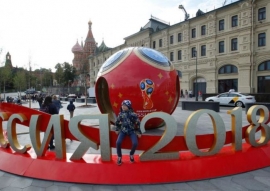 People gather near decorations for the upcoming 2018 FIFA World Cup, with St. Basil`s Cathedral seen in the background, in central Moscow, Russia on June 7. (Reuters)

“Corporate and government officials are most at risk, but don’t assume you’re too insignificant to be targeted,” Evanina added. “If you can do without the device, don’t take it. If you must take one, take a different device from your usual one and remove the battery when not in use.”

Evanina’s warning comes as US intelligence, law enforcement and congressional officials are still investigating Russian hacking in the 2016 presidential election and whether anyone with President Donald Trump’s campaign was aware of or aided it. Trump has repeatedly denied there was any collusion and Russia has said it did not meddle in the US election.

Another US official, speaking on condition of anonymity, said British security agencies have issued similar warnings to the British public and the England football team, which is competing for the World Cup.

In a statement, Britain’s National Cyber Security Center said it was “providing expert cyber security advice to the (UK) Football Association ahead of their departure to Russia for the 2018 FIFA World Cup.”

The NCSC, a branch of the Government Communications Headquarters, Britain’s electronic eavesdropping agency, also issued a warning to the public.

Private cyber security expert Patrick Wardle said the official warnings constituted “really good advice. When I travel to Russia, I bring ‘burner’ devices, so if they get hacked, it doesn’t really matter.”

A burner device is typically bought for temporary use, then thrown away.

US agencies have issued similar warnings before other major international sporting events, including the recent Winter Olympics in Seoul. (Reuters)