[ The Korea Herald – Send E-mail ]
Yemeni asylum seekers get mixed welcome
Refugee applicants band together with expats, locals band together to help fill gaps in providing food and shelter
By Paul Kerry
Published : Jun 13, 2018 - 09:50
Updated : Jun 13, 2018 - 10:24
Jeju Island has received more than 500 applications for refugee status from people fleeing the war in Yemen this year, most of them coming in April and May via the island’s visa exemption system.

But the government’s welcome has been mixed.

Faced with the sudden influx, the government has expedited permission for them to work. But at the same time, it has ended the visa-free access Yemeni nationals used to reach Jeju, making future applications more difficult.

And official sources have provided almost no material support to tide them over while they look for jobs, with many saying they are running out of money for accommodation and food.

Still, Adnan Al, one of the refugees fleeing the brutal civil war in Yemen that has raged since 2015, welcomed the acceptance of the refugees who had already come, as well as the move to allow them to work.

He said Yemenis were still often questioned and turned back at immigration points in the past.

“But last month, for whatever reason, they started letting people in without any questions. ... For us this was massive because this was the only country that let you in without a visa and accepts refugees and respects human rights.”

He said it was a gamble but “We couldn’t let it go, we had to try, because we had nowhere to go.”

“(The decision to allow us to work) is really good news,” he added. “They have never done that for anyone before, because by law you have to wait six months. So that’s really good, but until we start working and making money, the situation is still the same. We still have people on the streets.”

Al explained that Malaysia allows Yemenis in, but does not accept refugees, so while staying is a risky option, it can be a transit point on the way to Jeju. 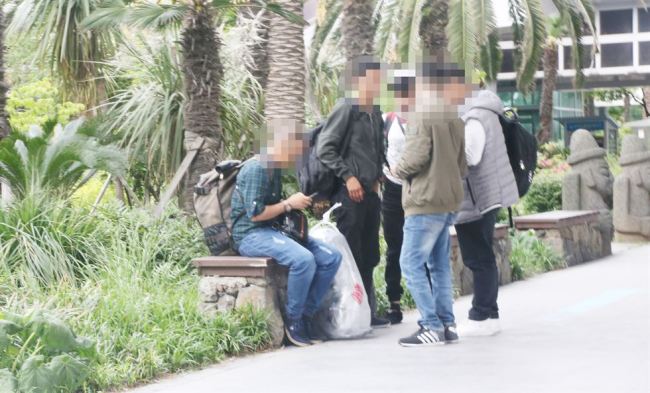 Caption: A group from Yemen wait for a taxi outside Jeju Airport on May 9. (Yonhap)
The local immigration department told the Korea Herald had received 541 refugee applications made by people from Yemen as of Monday, though Al pointed out that some who arived earlier than others may have gone to Seoul. It is an unusual surge for Korea, which has a low rate of refugee acceptance. Jeju received just 49 applicants from 2015 to 2017, according to the province's immigration department.

But the visa-free access Yemen nationals had to Jeju was closed on June 1. Without that access, refugees must apply at the port of entry, where they are screened before acceptance. Entry to apply for asylum can be declined for reasons including that officials consider that the applicant had come to Korea from a safe country where the applicant is free from persecution.

Al said that the refugees had expected to move on to Seoul, where there is government shelter and other assistance for refugees, but they had been refused permission to leave the island.

The Red Cross has delivered food to a hotel where refugees are staying, but many don’t have access to it, including some in the hotel.

Other than that, no official help has come.

“A lot of people came to speak to us but we didn’t actually receive anything from them.” Al said. “And then people started running out of money and they had to leave their rooms and go to a friend’s room, so instead of two people in one room, you might have five, six, seven. You can’t keep doing that because sooner or later everybody will be in the streets.”

He and some other refugees teamed up with expats last month to set up the Yemen Refugees in Jeju, a Facebook group to coordinate assistance from members of the public.

They have been able to provide food and shelter in the most pressing cases, though they are still looking for donations of money, places to stay and other materials.

“I was surprised to see how many locals and foreigners got involved. It was a lot of people,” he said. “But there is only so much they can do. It has to be a government solution. People can’t just live on handouts from locals or foreigners.”

The Korea Immigration Service told the Korea Herald gave Yemeni refugee applicants permission to work as of Monday -- a special measure, as applicants must usually wait six months before given permission to work -- to help them with subsistence, as the government support is not enough to live on and will take time to process. It also says it will provide support for Korean lessons.

Jeju authorities said the agricultural and dairy industries as well as restaurants in Jeju have indicated workforce shortages, so they are expected to hold the most likely job opportunities.

Two job introduction sessions have been arranged for Thursday and Monday in aquaculture and hotel work, but until they find jobs or receive housing assistance, many are facing uncertain accommodation prospects.

Alexis Oesterle, a member of Yemen Refugees in Jeju, said food, general supplies such as toothbrushes and blankets, and accommodation are the most pressing needs.

She added that once they had jobs they expected to get housing, “Unfortunately, in the meantime, I just got a message that three more are homeless right now and I am expecting that today more of the hotel contracts are going to be up and more of them are going to be homeless.”

On Sunday night while there were storms, Oesterle said she and others affiliated with the group had to house a group of 16 at a campsite.

Community efforts to provide housing are growing. One music studio has housed 15 people, and woman from a church has provided shelter for five women, and another lone woman and family of five had also been helped.

Oesterle said the group was trying to find firmer temporary housing where it could and was hopeful a local college might open up one of its dorms.

Another refugee said he has been staying in different hotels since arriving via Malaysia on May 5, “but after a few days I don’t know what I am going to do, because my money is almost finished.”

He said the hotel owner had sent them written notice that they should pay more for their two-person room, as four people are staying there, but he cannot afford it.

The Korea Immigration Service said that refugees with pressing needs could apply for special assistance via hikorea.go.kr.

“They asked us to apply for application for living expense (support). We applied but we don’t know exactly if we will get approval or not or when we will get money,” he said.

But with a family in Yemen dependent on any funds he can send them, he appreciated the government for allowing them to stay and work.

“The Korean government is OK with us,” he said. “Our problem right now is that we don’t have accommodation. We don’t have a job.”