Social media giant Twitter has launched a special emoji to mark the historic US-North Korea summit taking place in Singapore, on projections of an upturn in social media traffic.

Ahead of the historic meeting between US President Donald Trump and North Korean leader Kim Jong-un, Twitter encouraged users following the event to use a series of hashtags to activate a new special emoji.

“US President @realdonaldtrump will meet North Korea Chairman Kim Jong-un on 12 June in Singapore,” said a tweet from Twitter’s world government account, @TwitterGov on Sunday. “Tweet with these hashtags to unlock a special #TrumpKimSummit emoji.” 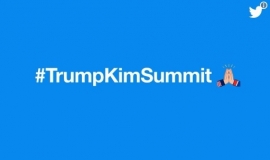 When a user writes the hashtags #TrumpKimSummit, #TrumpKim, #SingaporeSummit, #USNorthKorea and #USDPRK an emoji of two hands high-fiving appears alongside the words. One of the hands shows an American flag while the other displays a North Korean flag. Similar hashtags in Korean, Chinese and Japanese yield the same emoji.

In the past, Twitter has drawn up event-specific emojis for trending events that are driving new conversations online. But the topics have typically been limited to company promotions, sports events or holidays.

Given this, some users and media were divided on whether a high-five is an appropriate response to a serious political event that could either result in a step toward peace or increased military threats.

Others have taken issue with a portrayal of North Korea’s Kim Jong-un as a state leader equal to US President Trump, rather than a brutal dictator and human rights violator.