A South Korean food technology startup has launched a new restaurant guide introducing the top-rated restaurants in North Korea to wish for peace and the reunification of the Korean Peninsula, as the historic US-North Korea Summit was held in Singapore on Tuesday.

The SikSin platform now has a new “North Korea category” in its site, introducing the top restaurants from eight regions of North Korea, including Pyongyang, Kaesong, Kumgangsan, Baekdusan, Sinuiju, Wonsan, Nampo and Nasun. Some 70 restaurants are currently listed. 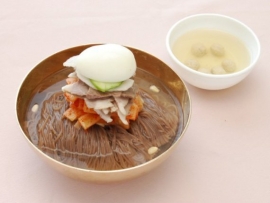 The information was compiled based on publicly available data, information posted on TripAdvisor, Ctrip, Qiongyou as well as restaurant reviews written by foreign tourists accessed via Google, SikSin said.

The menu offered by the restaurants are diverse, ranging from restaurants serving Western cuisines to those serving Pyongyang-style dishes.

Among those listed are restaurants selling fried chicken alongside a glass of Taedonggang beer as well as European-style bakeries, cafes and pubs. There are also places serving course meals featuring dishes made corn or acacia flowers, which are uncommon in South Korea, according to the company.

“We started compiling this ‘North Korea’s best restaurant guide’ with hopes of introducing the top restaurants from all over the world. Though North Korea is inaccessible for now, we believe there are many people who are eagerly waiting to go on a food tour to the country,” said SikSin CEO Ahn Byung-ik said.

“In compiling our guide, we wanted to offer some help to such aspiring travelers. We really hope for the success of the US-North Korea Summit will be successful and the day that the North and South will be able to freely cross each other’s territories.”