[Newsmaker] Trump, Kim Jong-un ready for history-making summit with top aides by side

After months of on-again, off-again speculation, President Donald Trump and North Korean leader Kim Jong-un will finally sit down for a historic summit in Singapore on Tuesday aimed at ending a nuclear standoff on the Korean Peninsula.

Accompanying Trump and Kim in Singapore for the high-stakes meeting are the leaders’ trusted foreign policy officials who have been leading the closed-door meetings in the flurry of diplomacy that culminated in Tuesday’s summit.

With the roster of who will be seated at the summit not yet released, US Secretary of State Mike Pompeo and Kim Yong-chol, a right-hand man to Kim Jong-un, are expected to be at the leaders’ sides, as the two men have been instrumental in realizing the summit that is to kick off at 9 a.m. at the Capella Hotel. 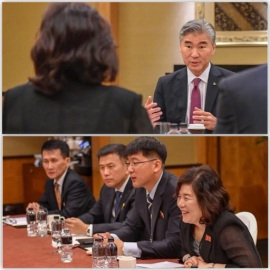 Working-level talks among officials from North Korea and the US are held at the Ritz-Carlton Hotel in Singapore on Monday ahead of Tuesday's US-North Korea summit.(Yonhap)

Trump and Kim have planned to meet one-on-one, joined only by translators, for up to two hours before admitting their respective advisers, the Associated Press has reported, citing a US official.

In the lead-up to the summit, Joe Hagin and Kim Chang-son led working-level meetings to hammer out the logistics of the summit and protocol in Singapore, while Sung Kim, a former US ambassador to South Korea and nuclear envoy, and Choe Son-hui led working-level talks at the inter-Korean border village of Panmunjeom to close the gap on the process and timeline of denuclearization.

On Monday, Kim and Choe met again at the Ritz-Carlton Hotel in Singapore in a last-ditch effort to nail down the final details. Sung Kim was joined by Hooker and Schriver, and Choe Son-hui was accompanied by Choe Kang-il, deputy director general for North American affairs at North Korea’s foreign ministry.

Kim Yo-jong, Kim Jong-un’s younger sister, was also spotted among the North Korean delegation. Kim Yo-jong, the first vice department director of the ruling Workers’ Party’s central committee, has been closely assisting her brother at key events, including the April 27 inter-Korean summit. She emerged in the public eye when she led a North Korean delegation to the Winter Olympics held in South Korea in February.

The presence of Hyon Song-wol, who led the North Korean art troupe to South Korea for performances ahead of the PyeongChang Olympics, in the delegation is seen as unusual. Hyon’s coming to Singapore sparked speculation that cultural engagement between the US and North Korea might be among agenda items at the summit.

US officials involved in the summit preparations have discussed enlisting gymnasts and musicians to bring the cultures together, Axios reported, citing sources familiar with the internal deliberations of the summit.

It remains to be seen whether Trump’s national security adviser John Bolton will be present at the summit. Unlike Pompeo, who has advocated diplomacy with North Korea, Bolton has been seen pursuing a tougher line on North Korea.

Bolton’s suggestion of the “Libya model” as a template for North Korea’s denuclearization angered North Korea, nearly derailing the summit. Libya’s leader Moammar Gadhafi abandoned the country’s nuclear arsenal in return for aid and normalization of relations with the US, but was killed in 2011 by NATO-backed rebels.