Throughout the convoluted process that led to the unprecedented summit between US President Donald Trump and North Korean leader Kim Jong-un, President Moon Jae-in of South Korea has played the role of mediator.

The monthslong process of arranging the summit was kick-started after Moon sent special envoys to Pyongyang in March. 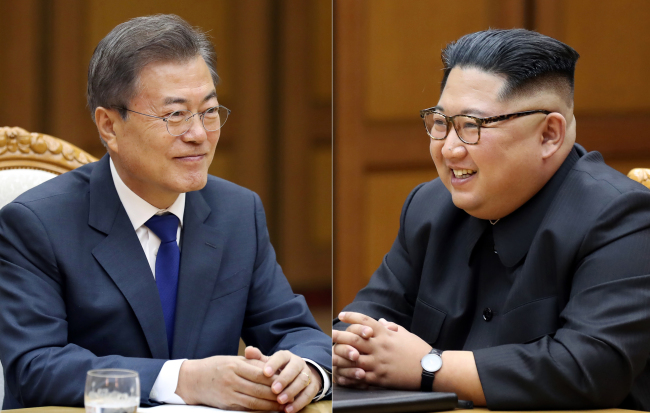 South Korean President Moon Jae-in and North Korean leader Kim Jong-un (Yonhap)
It was also Chung and Suh who relayed to Trump Kim’s wishes to meet and to discuss denuclearization.

Moon’s self-appointed role of matchmaker was accentuated further in May when Trump called off the meeting, citing hostilities displayed by Pyongyang.

On May 26, two days after Trump’s public cancellation of the summit, Moon met with North Korean leader Kim Jong-un for the second time in as many months.

Information regarding the meeting was kept from the public until it was over, and its results were revealed by Moon on the following day.

According to Moon, he relayed to Kim Trump’s willingness to provide economic aid in return for complete denuclearization, and the North Korean leader reaffirmed his commitment to denuclearization at the meeting.

Despite criticism from the conservative bloc, the meeting was hailed by many as reviving the US-North Korea summit, a must if Moon’s plans for establishing permanent peace on the peninsula is to be realized.

While hopes for a possible peace treaty among the Koreas and the US have been rising, Moon and his government’s role of mediator is unlikely to end with a successful US-North Korea summit.

In addition to the two Koreas and the US, China was involved in the 1950-53 Korean War, and Beijing’s agreement may be necessary to formally declare its end.

According to Cheong Wa Dae, Seoul has been communicating closely with Beijing over related issues.

Cheong Wa Dae spokesman Kim Eui-kyeom on June 5 said that his statement from May 4 that “discussion, communicating and cooperating” on matters regarding declaring an end to the war, and a peace treaty still stands.