Korean Air will host an annual meeting of air carriers around the world next year in Seoul, to discuss the future of commercial aviation industry and pending safety issues.

The International Air Transport Association is the world’s largest organization for air carriers. It holds a general meeting every year, bringing executives from air carriers, aircraft manufacturers and related industries from all around the world. Named a host of IATA’s general assembly, Korean Air hopes to upgrade the global reputation of the nation’s aviation industry, officials said. 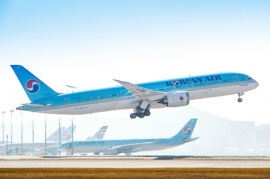 The Korean air carrier was named to host the conference at the 74th IATA Annual General Meeting held in Sydney on June 5, they added. This year, IATA members discussed ways of mapping the future of bio fuels, privatization of airports and application of aviation data in Sydney.

South Korea, a global hub for passenger transport and cargo, is the country is one of best locations for setting an aviation strategy, said Alexandre de Juniac, secretary general of IATA was quoted as saying. Korean Air hosting the event next year will help the nation draw global attention as “the center of the global aviation industry,” he added.

Korean Air has been a member of IATA since 1989, and has been an active member of four sub-committees of the organization. Its chief Cho Yang-ho is a member of the board of governors, a decision-making platform, and also a member of the strategy and policy committee, the company said. As the chairman of the host company, Cho will chair the upcoming IATA meeting in Seoul.

Korean Air will also host another meeting of air carriers in Asia Pacific region in October this year.

Established in 1945, IATA holds a total of 287 membership from 120 countries around the world. It has two headquarters – in Montreal and Geneva – and 54 regional offices in 53 countries. It represents interests of its members in pursuit of the development of the aviation industry, and also works to raise voices for deregulation, standardization of operations and making of related policies. To improve safety, the organization has been running Operational Safety Audit, to monitor safety procedures and operations of air carriers. The IATA also discusses with its members on international flight fares, based on distance and oil price.