South Korean tech titan Samsung Electronics is accelerating its research and development efforts on artificial intelligence capabilities abroad by hiring renowned experts and top talents, according to the industry on Friday.

At three newly opened AI centers in Toronto, Cambridge, England, and Moscow last month, efforts are being made to secure top talents from the AI field to help lead the centers.

In Toronto, the new center led by Larry Heck, senior vice president of Samsung Research America, is expected to launch its first projects early next month, and triple the size of the center by hiring up to 50 experts, said a local news source. 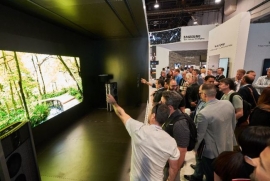 The Toronto AI Center was opened initially with 14 researchers after Samsung Vice Chairman Lee Jae-yong visited the city in April as part of his trip to study latest AI technology trends.

A Samsung official declined to reveal the specific number of experts at each center.

“The company is officially aimed at expanding the number of AI researchers to around 1,000 globally by 2020,” the official said. 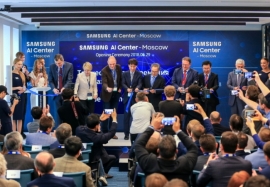 Officials cut a ribbon tape at the opening ceremony of Samsung AI Center in Moscow led by Professor Dmitry Vetrov on May 29. (Samsung Electronics)

In addition to the three centers under Samsung Research -- the company’s R&D hub for AI based in Seoul -- the tech giant is planning to open a new AI lab under the US-headquartered Samsung Strategy Innovation Center in Paris in the coming months, with an aim to recruit 50 AI experts by the end of the year.

“The Paris lab under SSIC is planning to hire up to 100 next year as announced by the French government in March,” the Samsung official said.