Portraying the direction of Hyundai’s future design strategy, the second design concept that takes the form of a sport utility vehicle is aimed to display “sensuous sportiness,” the automaker said.

The unveiling took place on Thursday, a day before the official opening of the Busan International Motor Show from Friday through June 17.

The latest design concept indicated Hyundai’s focus towards developing its SUV lineup, in order to break away from its current positioning and image as simply an affordable car. 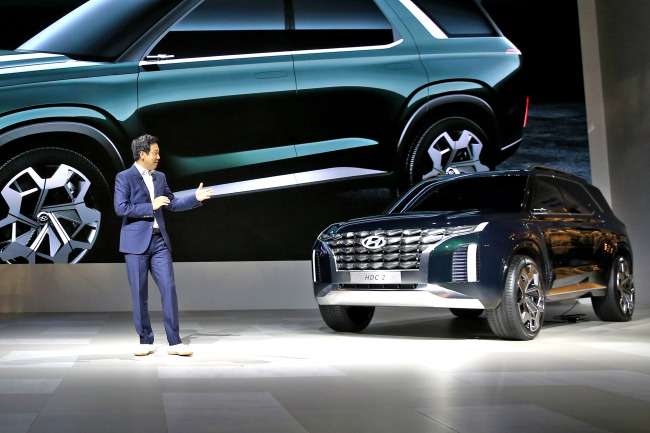 Seeking to expand its presence in the high performance vehicle market, Hyundai also shared its global strategy for its N brand, which began to take shape since March.

Placing motor sports at the top of its portfolio, Hyundai said it will participate in more motor sports competitions, and apply know-how and technology gained from the experience to the entire N lineup.

Hyundai added it will push forward with plans to develop sports cars, ultimately to pioneer the high performance vehicle market, starting with applying consequent designs and features across all models, the company said.

Hyundai’s sister company Kia Motors, in the meantime, revealed for the first time the interior design of the new Niro EV, with more space for the storage room compared to similar models and various convenience options for electronic devices including a wireless charger.

For the first time among Kia models, a SBW electronic gear nob has been applied for drivers to easily operate the vehicle.