Samsung Electronics on Wednesday announced the official launch of the first micro LED display for industrial use at a trade show in the US, commercializing the next-generation display technology.

Named “The Wall Professional,” the micro LED signage display is the first modular type bezel-less display whose size can be adjusted by users for different purposes. 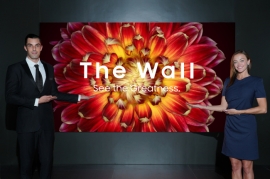 Samsung’s self-emissive micro LED display features up to 1,600 nits of brightness and the High Dynamic Range 10 plus format, as well as a picture quality engine for cinemas. A typical movie theater screen would be about 50 nits.

The company launched the signage display for corporate use, high-end hotels, museums and concert halls.

“Every place with walls is deemed an opportunity for The Wall display for expansion,” said Kim Seok-ki, executive vice president of the visual display business of Samsung. “We will spur sales efforts for micro LED displays starting with this event.”

The Korean tech giant will start taking orders at InfoComm 2018, taking place now in Las Vegas, and complete installation of the new displays in the US and other countries in the third quarter of this year.

Samsung unveiled a 146-inch micro LED TV for the first time at the Consumer Electronics Show in January, announcing the TV’s commercial launch in the second half of this year.

According to industry sources, mass production of micro LED panels for TVs is expected to kick off next month. The TVs are predicted to hit the market in September.