The Korea Herald is publishing a series of interviews on promising startups in the financial technology industry. This is the 16th installment. - Ed.

To retail shop owners occupied with day-to-day operations, managing card payments is an integral part of doing business, but at the same time, a time-consuming hassle.

Vendors in South Korea, where there are a total of eight card companies in business, also face the same situation, particularly as cards have become the main means of payment.

In 2017, the volume of card transactions in restaurants and accommodations came to 151.2 billion won ($141.2 million) on average per day, up 9 percent on-year, while retail shops like convenience stores saw 7 percent rise to 208.7 billion won a day, according to data by the Bank of Korea.

While card payment is becoming a norm to customers, collecting and managing card income statements are not, to merchants. 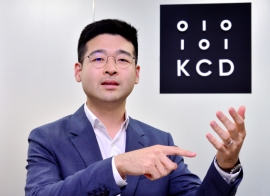 The high penetration of electronic devices like laptops and smartphones has failed to address this issue, according to Kim Dong-ho, chief executive of Korea’s financial technology startup Korea Credit Data.

“A vendor has to go to all different card issuers’ online channels to access and collect financial statements from them,” the 31-year-old told The Korea Herald. “Summing up income records to calculate revenue needs manual work.”

Cashnote, a financial service operated by KCD, has developed a service that combines card transactions and authorizations, allowing merchants to see the totals at a glance through an app, for free.

Those who put in their business registration number and other financial and personal information will be fed daily financial reports covering card transaction records of users, the amount of income through authorization responses from card issuers and the amount of tax due for payment over the past two years. Cashnote also shows the projected volume of income from authorization responses in the following two days.

“The service significantly improved the accessibility to financial record management for small business owners,” he said. 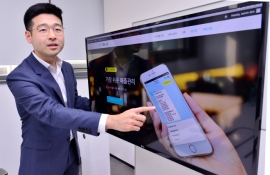 Since Cashnote was launched in April 2017, the firm has garnered some 75,000 merchant users as of the end of May. It has managed accumulated 15.4 trillion won of money flow.

Over half of its users, unlike conventional financial service apps, are in their 40s or above, according to Kim. Users range from owners of restaurants, clinics, barber shop, nail salon or convenience stores.

“Regardless of what sort of business they are involved in, any brick-and-mortar shop owners have the responsibility to manage their money flow,” Kim said. “We have stuck to that basic concept since the launch of the app.”

KCD’s only source of revenue is a monthly fee for additional functions. If the vendor using Cashnote service pays 4,900 won a month, they can be offered monthly financial reports, as well as push alerts in case of a failure in retailers’ card payment processing or authorization from card firms. Over 40 percent of retailers had experienced payment authorization failure in two years, according to KCD.

Cashnote is an add-on function of the KakaoTalk messenger app, which is used by 43 million Koreans. The app was created in April 2017, using Kakao’s application programming interface, which has been open to developers since January 2017.

The popularity of the messenger app contributed to Cashnote’s exponential growth, allowing KCD to draw over 10,000 retailer users in three months since its launch.

The growth also drew attention of Kakao, Kim added, resulting in Kakao’s decision to invest in 4 billion won in October 2017. Now, some 95 percent of users to take to the app at least once a day.

“As a result, (Cashnote) has become an indispensable part (for retailers), like a habit,” Kim said.

Being engineer-heavy, the fintech startup barely took on marketing strategies, he added, citing void of workforce to implement offline marketing campaigns. Some 60 percent of app users come upon recommendations, according to Kim.