[ The Korea Herald – Send E-mail ]
Expectations grow for US-NK talks to be held as planned
By Ock Hyun-ju
Published : May 27, 2018 - 15:34
Updated : May 27, 2018 - 18:01
The US-North Korea summit may be back on track following North Korean leader Kim Jong-un’s affirmation of his commitment to “complete denuclearization” and US President Donald Trump commenting negotiations over the summit are “going very well.”

Kim has a firm commitment to “a complete denuclearization” and willingness to “end the history of war and confrontation” South Korean President Moon Jae-in said during a press briefing Sunday after he held talks with Kim on the border village of Panmunjeom a day earlier.

In Washington, Trump said that preparations for his summit with Kim, which he had earlier called off, were “going on very well” and there was “a lot of good will” between the countries. He also said he is still considering holding the summit on June 12 in Singapore.

The surprising turn of events comes shortly after Trump abruptly called off his meeting with Kim on Thursday, citing “open hostility” and “anger” from Pyongyang, throwing monthslong diplomatic maneuvers over the North’s nuclear weapons into doubt. 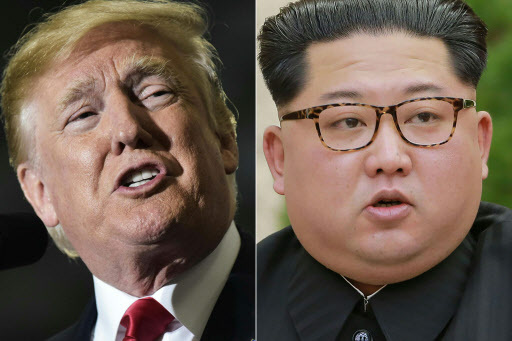 US President Donald Trump (left), North Korean leader Kim Jong-un (Yonhap)
Less than a day later, Trump said in a Tweet the summit with Kim could still be held as scheduled, after North Korea asked Trump to reconsider and said it was willing to sit down for talks with the US “at any time” in a statement.

A team of US officials flew to Singapore to prepare for the June 12 summit, should it take place, the White House said Saturday.

Moon said on Sunday that whether the summit will be held and, if so, whether it will be successful are up to working-level negotiations between the US and North Korea taking place in Singapore.

“As the summit is being prepared amid North Korea and the US clearly understanding what the other party wants, I am expecting the working-level negotiations, and June 12 summit to go well,” Moon told reporters.

“I think the US tested North Korea‘s resolve to denuclearize, as part of its negotiating tactic,” said Koh Yu-hwan, professor at Dongguk University and policy adviser to Moon. “In sign of desperation, Kim used his meeting with President Moon to deliver his willingness to hold a summit with Trump.”

“A series of Kim’s remarks imply that it is willing to completely denuclearize in a way and at a pace demanded by Trump as long as it gets security assurances at the same speed,” he said, adding that the near collapse of the summit might help them better understand their differences.

But the fate of the summit would now depend on whether North Korea lives up to the US’ expectations of a quick, complete denuclearization and whether the US meets the North’s demands to guarantee its regime securit, according to another expert.

“The two sides could still find it difficult to narrow the differences over the measures for security assurances for North Korea and the time frame to implement denuclearization.”

As for North Korea, Kim is worried over whether it could trust that the US would end its hostile policy and guarantee the security of his regime when the North denuclearizes itself, Moon said during the press briefing.

Cheong Wa Dae said that the Koreas are discussing the measures to ease Kim’s concerns about the regime security -- changing an armistice into a peace treaty, declaring an end to the Korean War and signing a non-aggression pact, among others.

Even if the summit goes ahead as planned, there are still doubts over whether the countries could reach an agreement.

Washington wants to reach a comprehensive one-shot deal in which North Korea gives up all its nuclear weapons in an irreversible and verifiable way as quickly as possible before any economic rewards -- such as sanctions relief -- are granted. Pyongyang has called for a phased and synchronized process in which the North gets economic rewards and security assurances from the US as it takes steps to denuclearize.

Trump signaled flexibility about a phased dismantling of North Korea’s nuclear weapons programs before he cancelled the meeting last week, saying “It would certainly be better if it were all in one. Does it have to be? I don’t think I want to totally commit myself.”

“It is now Trump who is holding leverage over North Korea in denuclearization negotiations. The US will see how much North Korea voluntarily offers to dismantle its nuclear arsenal,” said Park Won-gon, professor at Handong Global University.