The banh mi pizza at Slice -- a fresh, aromatic pie with a fiery kick -- was not on the menu when this eight-seater, New York-style pizza shop opened in Cheongdam-dong a little over two years ago.

After about a year in business, owner Alex Ham first put it on the menu as a special and it stuck, becoming a new addition to Slice’s repertoire of pies, which currently total six.

“I’m a huge fan of the banh mi sandwich,” said Ham, 46, adding this was “probably the main reason” behind his decision to create a pizza version of this Vietnamese specialty. 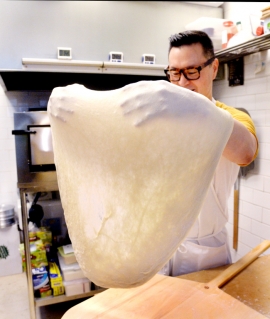 Ham’s take on banh mi is all about strategic layering.

When an order comes in, he hand tosses some house-made pizza dough -- crafted with water, salt, high-gluten flour, yeast and cold fermented for 48 to 72 hours -- before topping it with cheese and lemongrass-infused pork sausage.

After a stint in the oven, he then adds a cilantro-based sauce, thin wheels of cucumber, plenty of fresh cilantro, pickled carrots and daikon radish.

A hot crisp crust with a chewy center pairs well with the piquant, aromatic sauce, the cool crunch of cucumbers, the fresh tang of pickled vegetables and the fragrant, house-made sausage.

“It takes a lot of work,” said Ham, who, despite the amount of prep required to pickle the vegetables, make the sauce and sausage, keeps this flavorful pie on the menu along with other try-worthy pizzas. 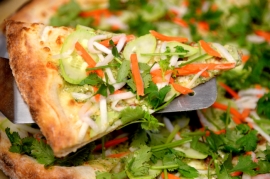 True to its concept, Slice also serves classic New York-style pizzas, including traditional cheese and also pepperoni, which one can get as classic 18-inch pies or by the slice, which are cut from 20-inch pies.

Ham keeps his approach to pepperoni simple, hand tossing the dough until it is quite thin; a personal preference fueled by a desire to achieve what he considers the ideal “balance between dough, sauce and cheese.”

When the dough is thin enough, he tops it with tomato sauce, mozzarella cheese and pepperoni.

The resulting pie emerges -- gooey, saucy and slightly salty from those crisp, savory rounds of pepperoni.

The crust is crisp on the outside, but retains a light, airy chew throughout the fluffed-up edges.

In addition to the fixed repertoire, Ham likes to add small batches of specials to the menu, which he posts on Slice’s Instagram account.

One of his most recent specials was a bacon, spicy sausage and arugula pie, which Ham spiced up with an onion and strawberry jam.

While one can vie for one of the few seats in this small space to enjoy Slice’s pies straight out of the oven, Slice also delivers within a 3-kilometer radius for an extra 1,000 won to 2,000 won or via several food delivery services.

“More than half of our business is delivery,” said Ham. 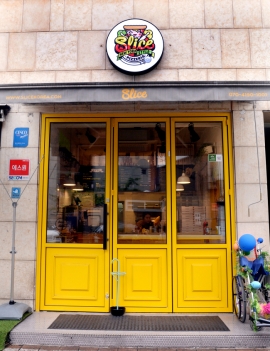