WASHINGTON -- US Secretary of State Mike Pompeo said Wednesday that he raised the issue of North Korea's human rights abuses when he met leader Kim Jong-un.

Pompeo traveled to Pyongyang twice -- once in April and again in May -- to lay the groundwork for a June 12 meeting in Singapore between US President Donald Trump and Kim.

The focus of that summit would be the dismantlement of North Korea's nuclear weapons program, but many also see it as an opportunity to address grave human rights abuses purportedly carried out by the regime. 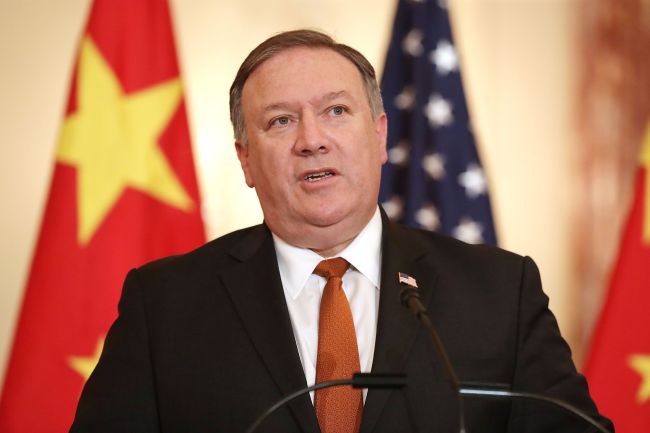 US Secretary of State Mike Pompeo delivers brief remarks during a news conference with Chinese Foreign Minister Wang Yi in the Benjamin Franklin Room at the State Department`s Harry S. Truman headquarters building May 23, 2018 in Washington, DC. (AFP-Yonhap)
"The issue was raised directly between me and Chairman Kim, and it will be part of the discussions as we move forward," Pompeo told lawmakers on the House Foreign Affairs Committee, when asked if the human rights issue could be part of a nuclear deal with Pyongyang.

Pressed to answer whether Kim gave his commitment, Pompeo said, "We have broad outlines of what it is each nation is prepared to do."

Last week North Korea threatened to pull out of the summit, citing anger over US demands for "unilateral" denuclearization. Trump suggested Tuesday that the meeting may not happen June 12 if US conditions aren't met but could still take place at a later date.

Pompeo told lawmakers the summit is still on track for June 12, and "if the right deal is not on the table, we will respectfully walk away."

Pompeo acknowledged that a lot of work remains to be done to find common ground with the North. Still, Kim "shared candidly" that he understands that his people's prosperity and well-being depend on a "strategic shift."

"I could not have been clearer about the scope of the verification work that would be required, all of the elements that would be necessary in order for America to understand that there had been real denuclearization," he said, adding that Kim "took those on board."

"He made clear it was important to him that when that time came, when those objectives had been achieved, he in turn would receive economic help from America in the form of private sector business' knowledge and know-how," he continued. "He wanted security assurances from the world, the end of the status that sits between South and North Korea, with the eventual goal of a peace treaty."

The US has said it wants to see the complete, verifiable and irreversible dismantlement of North Korea's nuclear program.

"Our eyes are wide open to the lessons of history, but we're optimistic that we can achieve an outcome that would be great for the world," the secretary said, alluding to the North's reputation for cheating on past nuclear deals.

Until CVID is achieved, economic sanctions and pressure on the regime will continue, he later added at a joint press conference with Chinese Foreign Minister Wang Yi.

Trump has appeared to blame China for the North's sudden threat to cancel the summit, saying he sensed a shift in Kim's attitude after the latter met with Chinese President Xi Jinping a second time.

Calling Xi a "world class poker player," Trump has hinted that Beijing could be using its influence with Pyongyang as a bargaining chip in trade negotiations with the US.

China is a key player in the US-led sanctions campaign against Pyongyang. As North Korea's only major ally and trading partner, it has significant leverage over the wayward nation but also has an interest in keeping the North as a buffer against US-allied South Korea. (Yonhap)