[ The Korea Herald – Send E-mail ]
Trump reaffirms security assurance for N. Korea
By Ock Hyun-ju
Published : May 18, 2018 - 17:36
Updated : May 18, 2018 - 19:10
US President Donald Trump stressed Thursday (US time) that North Korean leader Kim Jong-un’s regime will not be affected if a denuclearization deal is reached between the two countries in an apparent effort to appease Pyongyang.

Trump also said that the “Libyan model” -- which Pyongyang has strongly opposed -- isn’t a model he is considering for North Korea’s denuclearization, but warned that Kim could face the same fate as Libya’s former leader if the North doesn’t strike a deal on its nuclear arsenal.

His remarks came after Pyongyang said it will reconsider the US-North Korea summit set for June 12 in Singapore, denouncing the US for pushing it to “unilaterally” give up its nuclear weapons programs.

“The Libyan model isn’t a model that we have (in mind) at all when we’re thinking of North Korea,” Trump said, mindful of North Korea that blasted his national security adviser John Bolton who referred to Libya as a model for denuclearization.

Threatening to pull out of the summit with the US, North Korea’s Vice Foreign Minister Kim Kye-gwan said in a statement Wednesday, “We do not hide our feeling of repugnance towards him (Bolton).”

In 2003, Gaddafi agreed to give up his nuclear programs in exchange for the easing of sanctions and normalization of relations with the US. However, he was toppled and killed by West-backed rebels in 2011, which the North cited as a reason for keeping its nuclear weapons programs.

Trump warned that any failure to make a deal could have consequences for Kim. Describing what happened to Libyan leader Muammar Gaddafi “a total decimation,” Trump said “that model would take place if we don’t make a deal, most likely.”

“But if we make a deal, I think Kim Jong-un is going to be very, very happy,” Trump said. “This with Kim Jong-un would be something where he would be there. He would be running his country. His country would be very rich.”

“And he’ll get protections that will be very strong,” he said, stressing he is “willing to do a lot” to provide security guarantees to Kim. 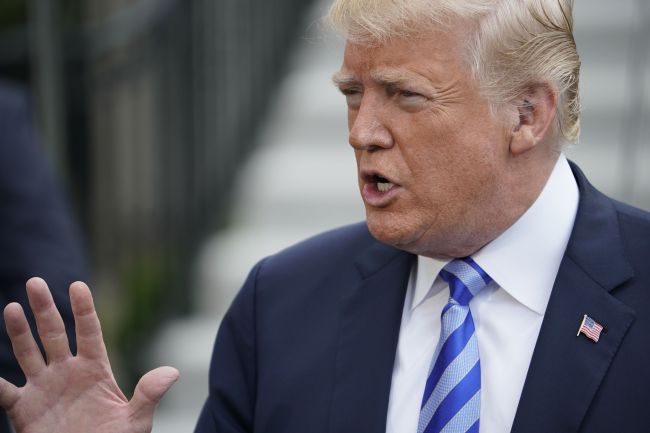 US President Donald Trump (AFP-Yonhap)
North Korea and the US are set to sit down for talks on June 12 in Singapore to discuss the North’s dismantling of its nuclear and missile weapons programs in return for a security assurance for the reclusive regime.

Despite the North’s threat to call off the summit, US and North Korean officials are preparing for the summit “like nothing happened,” according to Trump.

Experts say that Trump’s remarks reflects his strong willingness to make the high-stakes summit happen to claim a diplomatic victory.

“Trump‘s remarks are intended to appease North Korea to continue the momentum of dialogue and go ahead with the summit with Kim as planned,” said Park Won-gon, professor at Handong Global University.

A collapse of the high-stakes meeting would deal a blow to both Trump and Kim, he said.

“Trump denied the Libya model as a template for North Korea’s denuclearization and promised strong security guarantees for the North. It would be probably things North Korea might have wanted to hear from the US,” he said.

Trump hints that he is willing to accept more of North Korea’s demands, but at a cost.

“But at the same time, Trump is pressuring North Korea to make the summit successful. It is also warning that the US could consider other options -- such as a military option -- if the talks fall through,” said Shin Beom-chul, senior fellow at the Asan Institute for Policy Studies.

Speculations over a possible template for North Korea‘s denuclearization surfaced once again after Trump said, “If you look at South Korea, this would be really a South Korean model in terms of their industry….. They‘re hard-working, incredible people.”

“I think the US intends to give economic incentives to North Korea if it agrees to denuclearize,” Shin said.

Mike Pompeo, US secretary of state, earlier said that the US “is prepared to work with North Korea to achieve prosperity on the par with our South Korean friends” if the North takes bold action.

But as for a possible template for the North’s denuclearization, it is impossible to apply any existing models from history to North Korea, a de facto nuclear armed state, according the professor Park.

“Trump model, Libya model, South Korea model.... they are not the cases for North Korea‘s denuclearization. We are doing something completely new and we haven’t done before,” he said.