With North Korea rejecting Libya’s denuclearization as a model for its own denuclearization, the US presented an alternative named after its President Donald Trump amid concerns over North Korea’s threat to walk away from their planned summit.

White House press secretary Sarah Huckabee Wednesday mentioned a “Trump model” while responding to remarks by North Korea’s Vice Foreign Minister Kim Kye-Gwan, who expressed “repugnance” for being compared to Libya as an example for giving up nuclear weapons.

While the idea still appears to be more of an attempt to downplay comments by national security adviser John Bolton rather than a specific policy for denuclearization, the Trump model might signal the US’ shift in tone in future negotiations with North Korea, analyst said.

“The idea of a Trump model is like offering a first-aid kit to the US-North Korea summit,” said Kim Yeol-su, the head of security strategy at the Korea Institute for Military Affairs. “Caught off guard by North Korea, the Trump administration did something to keep the negotiations intact.” 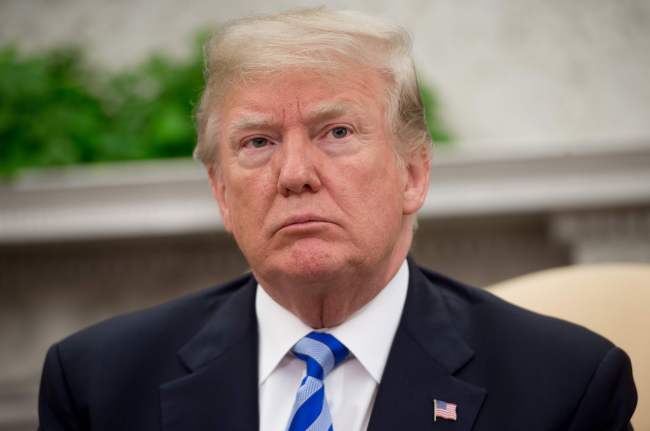 US President Donald Trump. Yonhap
When introducing the idea of the Trump model, press secretary Sanders said that there is no “cookie-cutter model” that can be applied to future negotiations with the nuclear-armed North Korea.

Her remarks came after North Korea expressed anger over comments from the US on the goals of the summit, particularly those by national security adviser Bolton, who cited Libya as an ideal example for striking a nuclear deal.

In an interview with Fox News in late April, Bolton said negotiations with North Korea should be similar to that with Libya, which agreed to box up its entire nuclear program and ship it out of the country.

“We have very much in mind the Libya model from 2003, 2004,” he said, suggesting that North Korea should receive no benefits, including the lifting of sanctions, until it has surrendered its entire nuclear infrastructure.

Given the complexities of the denuclearization process, and the differences between North Korea and other nuclear-seeking states, the mention of the Trump model reflects Washington’s desire to accomplish the goal of denuclearization as promptly as possible, analysts said.

Through its relentless nuclear and ballistic missile tests, North Korea is believed to possess as many as 60 nuclear warheads and has made major advancements in nuclear technology that would allow Pyongyang to deliver them to the US mainland.

While Libya had its own nuclear weapons program, it had not yet developed a nuclear bomb when it agreed to end its program. The nuclear material was shipped out of the country and much of it was stored at a US weapons laboratory in Oak Ridge, Tennessee.

“Everyone in Washington understands the Libyan model might not work on North Korea,” said Ko Myung-hyun, a researcher at the Asan Institute for Policy Studies. “They are simply in a different situation.”

But there is one important lesson from the Libyan model that the Trump administration wants to apply to its new model for North Korea: the speedy verification of the denuclearization process.

In December 2003, then-Libyan President Muammar Gaddafi proclaimed that the country would renounce its nuclear program and welcome international inspectors to verify that Tripoli would follow through on its commitment.

Following Gaddafi’s announcement, multinational inspectors worked to dismantle Libya’s chemical and nuclear weapons programs. The process took only about two years before those materials were shipped off to the US.

“The Trump administration wants to come up with a compressed timeline of achieving the denuclearization goal, set a milestone in each phase and provide corresponding rewards to North Korea,” said Ko.

The idea of the Trump model could signal a change from hard-line positions in Washington that there will be no reward until North Korea completely abandons its nuclear arsenal and other weapons of mass destruction, analysts said.

“There might be certain concessions involved during the negotiation process with North Korea, particularly concerning the reward for North Korea’s complete denuclearization and the methods to achieve the goal,” said Kim of the Korea Institute for Military Affairs.

Among them might be providing a “security guarantee” to North Korea in return for its denuclearization progress, such as an adjustment in the deployment of strategic assets to the Korean Peninsula, like nuclear-capable bombers and aircraft carriers.

It also might signal that the Trump administration may show more flexibility toward North Korea’s call for taking “synchronized” steps to satisfy the North’s security needs in return for any “phased” moves toward denuclearization.

“It would be like a scaled-down version of the Libyan model,” said Shin Beom-chul from the Asan Institute for Policy Studies. “The reduced version involves making concessions depending on the negotiation process.”